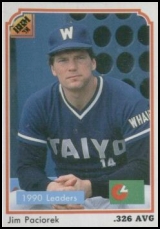 Jim Paciorek appeared one year in the major leagues, six years in the minors and six years in Japan. He is the brother of two major leaguers - Tom Paciorek, who had a long career as a player and broadcaster, and John Paciorek, possessor of the perfect batting average. Another brother, Mike Paciorek, as well as nephews Mack Paciorek, Pete Paciorek and Tom Paciorek Jr. also played professional baseball. His son, Joey Paciorek, was drafted by the Milwaukee Brewers in the 15th round of the 2007 amateur draft and played nine years in the minors and in independent ball, rising as high as AAA.

Jim played for the University of Michigan, where he was an All-American. He won Gold with Team USA in the 1981 World Games and 1981 Intercontinental Cup as they beat out Cuba to a world title for the first time. He was drafted in 1982 by the Milwaukee Brewers, and while he mostly hit over .300 in the Brewers minor league organization, he didn't make it to the big leagues until 1987, when he got 101 at-bats. It was the year when Paul Molitor hit .353 for the Brewers.

"Nieves . . . needed three other fine defensive plays to insure the no-hitter. The left fielder, Jim Paciorek, made a diving catch in the second and the third baseman, Paul Molitor, made two outstanding plays . . ." - article in the N.Y. Times (April 15, 1987) about the first no-hitter in Milwaukee Brewers history, one in which Jim Paciorek made a key play