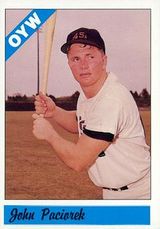 John Paciorek holds the major league record with a career 1.000 batting average and three hits. He debuted in 1963 with the Houston Colt .45s in the final game of the season against the New York Mets on September 29th. He went 3 for 3, walked twice, and scored four runs.

John had suffered a back injury in the minors that year, hitting just .219 with 9 homers with the Modesto Colts of the California League and was actually in Houston to have his back checked out. But as he was a bonus baby already on the 40-man roster, the Colts decided to give him a look in a meaningless game (the two teams finished 9th and 10th in the National League that season. He was just 18 at the time and seemed to have a bright future ahead of him, but the injury got worse over the winter and even though he was penciled in as Houston's starting center fielder in spring training in 1964, the back pain was so bad he couldn't bend over. He was sent to the minors, where he struggled badly and had to undergo spinal fusion surgery, which put him out of action for all of 1965. By the time he recovered, the back problems had led to chronic arm problems and pulled hamstrings, and he never regained his batting stroke. John Paciorek retired in 1969 with one career game, but what a game it was.

Paciorek was signed for the Colt .45s by scout Walt Laskowski and assistant GM Eddie Robinson for a reported $100,000 bonus and a college scholarship.