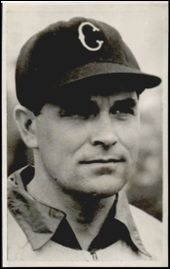 First baseball Eddie Robinson was a four-time All-Star during 13 seasons in the majors. He put the ball in play and struck out infrequently, which was unusual for a minor slugger, and hit for a fairly high average until the latter part of his career.

Robinson made his pro debut with the Valdosta Trojans in 1939. The following summer, he hit .323 with 21 triples and 8 homers for Valdosta. After hitting .306 with 27 home runs for the Baltimore Orioles of the International League in 1942, he made his big league debut with the Cleveland Indians that September, going 1-for-8 in 8 games. He missed the next three seasons serving in the Navy during World War II and returned to baseball in 1946, hitting .318 with 34 homers for Baltimore and earning the International League MVP award (beating Jackie Robinson for the honor). He hit .400 with 3 home runs in 8 games for Cleveland that summer and took over as the club's regular first baseman early in the 1947 campaign, slugging 14 homers before a broken ankle put an early end to his year.

After playing for the World Series champions in 1948, Robinson was traded to the Washington Senators as part of the deal that brought Early Wynn to Cleveland. He had his best season so far that summer, hitting .294 with 18 home runs and starting at first in the All-Star Game. After beginning the next season with just one home run in his first 36 games, he was sent to the Chicago White Sox as part of a six-player trade. Following the deal, he added 20 more round trippers. The following summer, he hit 29 homers for the Sox to tie Gus Zernial's team record (a mark that would stand for nearly 20 more years). Following two All-Star seasons in Chicago, he was traded to the Philadelphia Athletics in early in 1953.

After a solid season for Philadelphia in 1953, when he hit 22 home runs, Robinson was again traded, this time to the New York Yankees as part of an eleven-player deal. His playing time declined over the next several years. Despite only appearing in only 88 games in 1955, he hit 16 home runs with 42 runs batted in (with only 36 hits). He followed his time in New York with stints with the Athletics (now in Kansas City), the Detroit Tigers, the Indians again, and finally the Baltimore Orioles. Appearing in his final game in 1957, he ended his career having played for 7 of the 8 American League teams at the time (with the Boston Red Sox being the only exception).

Robinson eventually became the field director for the Orioles in 1961. He moved to the Houston Colt .45s as the assistant GM in 1962 and became the club's farm director in 1964. He was Kansas City's director of player development in 1976. During that time, he became the subject of media and fan criticism for limiting young prospects to a pitch count of 100 pitches. The most glaring example was George Lauzerique's being cost a no-hitter in 1967 with the Birmingham A's. Robinson then was with the Atlanta Braves as farm director from 1968 to 1972 and General Manager from 1973 to 1976. During his tenure with the Braves, he dealt Hank Aaron to the Milwaukee Brewers. He moved on to the Texas Rangers as GM from 1977 to 1982, bringing Fergie Jenkins, Buddy Bell, Mickey Rivers, and Charlie Hough to the club. In the 1990s, he was Assistant Coordinator of Scouting for the Yankees, and he scouted for various other clubs over the years.

With the passing of Val Heim on November 21, 2019, 98 year-old Robinson became the Oldest Living MLB Player.