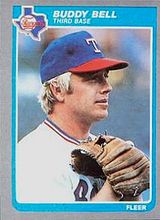 "Might be the top player in the league. He plays every day... just write his name in the lineup. A top clutch hitter." - Brooks Robinson

Third baseman Buddy Bell played eighteen years in the majors, winning six Gold Gloves and making the All-Star team five times but never making it to the postseason. Following his playing days, he was a big league manager for several different teams.

The son of Gus Bell, Buddy was selected by the Cleveland Indians in the 16th round of the 1969 amateur draft. Originally a second baseman, he moved to third while playing for the Sumter Indians in 1970. When he reached the majors with the Indians in 1972, he primarily played right field, but was moved back to third the next summer, when he was named to his first American League All-Star squad. After seven years in Cleveland, Bell was dealt to the Texas Rangers for Toby Harrah following the 1978 campaign. In his first year with Texas, he hit .299 with 18 home runs and a career-best 101 RBI and won his first Gold Glove. Over the next five summers, he added five more Gold Gloves and was named an All-Star four more times. Midway through 1985, Bell was traded to the Cincinnati Reds for Duane Walker and Jeff Russell. He struggled that year, hitting just .219 in 67 games, but bounced back in 1986, clubbing a career-high 20 homers. He later briefly played for the Houston Astros before rejoining the Rangers and retiring as a member of the club for which he had his greatest success.

After his playing career ended, Bell was director of minor league instruction for the Chicago White Sox in 1991-1993. He was an Indians coach in 1994 and 1995. From 1996 to 1998, he managed the Detroit Tigers, and he was a minor league instructor for the Reds in 1999. He managed Team USA to a Silver Medal in the 1999 Pan American Games. He was the Colorado Rockies skipper from 2000 to 2002 and again a member of the Indians coaching staff from 2003 to 2005. In 2005, he became manager of the Kansas City Royals when Tony Pena resigned, taking over for interim skipper Bob Schaefer. Late the following season, he took a leave of absence from the team to have a growth in his throat diagnosed and treated, and after the next year's campaign, he stepped down as the club's skipper. Bell returned to the White Sox as director of minor league instruction in 2008, then director of player development from 2009 to 2011. In 2012, he was promoted to Vice President for player development and special assignments. In 2013, he was Vice President/Assistant General Manager. Before the 2018 season, he returned to the Reds as senior adviser to the president of baseball operations, with responsibilities in the area of player development. When manager Bryan Price was fired in April, there was speculation that Bell was on the list of candidates to replace him, but he stated that he was happy with his current role and had no wish to return to the dugout.

In addition to his father, Bell's sons, David and Mike, played in the majors. Mike's son, Luke Bell, was drafted in 2019. Rico Carty, Frank Robinson, and Leo Cardenas played with both Gus and Buddy Bell. Barry Larkin and Norm Charlton played with both Mike and Buddy. Eight players played with both Buddy and David Bell.