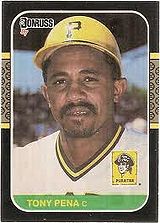 Tony Pena was known for his unique style of catching. He would sit on the ground with one knee tucked to the side while his other leg was straight out to the other side. He could even throw out would-be base stealers from this position with an incredibly strong arm. He ended his career with 1,950 games behind the plate, fourth most of all catchers.

After his career ended, he joined the Chicago White Sox and Houston Astros as a minor league manager, guiding the 1998 AZL White Sox and the 1999-2001 New Orleans Zephyrs. After spending a little more than a month as Astros bench coach, he became manager of the Kansas City Royals in May 2002. He was widely praised for leading the Royals to a rare winning season in 2003, winning the American League Manager of the Year Award, but the club sunk back into mediocrity in 2004. He left the Royals in frustration early in 2005, leaving the team scrambling to find a replacement, and joined the New York Yankees as a coach in 2006. He was one of three men on the short list to replace Joe Torre as Yankees manager after the 2007 season, along with Don Mattingly and Joe Girardi, but the job went to Girardi and Pena returned to coaching, staying for the duration of Girardi's tenure, until the end of the 2017 season.

Pena's son Tony reached the majors in 2006 with the Atlanta Braves and became the Royals' starting shortstop in 2007. Another son, Francisco Peña, a catcher like Tony, reached the big leagues in 2014. Pena's brother Ramon Pena also played briefly for the Detroit Tigers in 1989. His nephew Rudy Pena reached AA.

He was elected to the Latino Baseball Hall of Fame as part of its 2012 class. He managed the Dominican national team to a perfect record in the 2013 World Baseball Classic, after the team failed to make it out of the first round in 2009; it was the first non-Japanese team to win a World Baseball Classic. He was elected to the Caribbean Baseball Hall of Fame in 2016; he had hit .270/?/.374 in 38 Caribbean Series games, winning two Caribbean Series titles in eight Series.