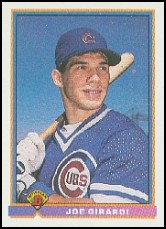 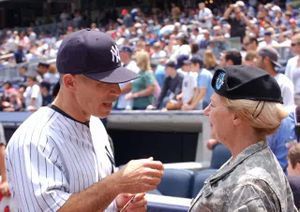 Catcher Joe Girardi was signed as a 5th round pick in the 1986 amateur draft by the Chicago Cubs and scout John Hennessey. He had played for Team USA in the 1985 Intercontinental Cup, splitting catching duties with Matt Merullo; they went just 2-5 despite having Kevin Brown, Matt Williams, Jeff King, Jack McDowell and Erik Hanson on their roster and the fact that only one future major leaguer played for the other 7 nations combined.

He played 15 seasons as a major league catcher, with a total of 1,277 games. He first reached the majors with the Cubs in 1989, the year they won a surprise division title on the back of great rookie seasons by CF Jerome Walton and LF Dwight Smith, and the late-game antics of closer Mitch Williams. He shared catching duties with Damon Berryhill and Rick Wrona that year, playing 59 games, but was the man in the NLCS against the San Francisco Giants as he started four of the five games. He became the regular catcher in 1990, hitting .270 in 133 games, then stuck around largely thanks to his defensive play. He never had much power, with a career best of 8 homers in the thin air of Coors Field in 1995, and usually hit around .270, but he was very strong behind the dish. After the Cubs, he played for the Colorado Rockies from 1993, their first season, to 1995, then with the New York Yankees for four years from 1996 to 1999. He returned to Chicago from 2000 to 2002 and ended his career with 16 games with the St. Louis Cardinals in 2003. He appeared regularly in the postseason, doing so in six different seasons and was part of three World Series-winning teams with the Yankees.

Girardi was named manager of the Florida Marlins on October 19, 2005 after spending a season as a New York Yankees coach. He led the team to a 78-84 record in 2006 despite having a lineup consisting largely of castoffs and rookies. However, he was fired after just one season due to ongoing disputes with the team's front office. Girardi was offered the job as manager of the Baltimore Orioles after Sam Perlozzo was fired in 2007, but he turned it down. He was then named manager of the New York Yankees on October 30, 2007, replacing Joe Torre.

Girardi found quick success as manager of the Yankees. While they missed the postseason in his first season, 2008, the last one played at old Yankee Stadium, they still finished 16 games above .500. In 2009, they had a dream season, christening their new ballpark, New Yankee Stadium, with a World Series win over the Philadelphia Phillies. They then made the postseason, the next three seasons, although they could proceed no further than the American League Championship Series. That run of early success secured Giardi's position so that when the Yankees went through the predictable difficult transition caused by the retirement of long-time stars such as Derek Jeter, Mariano Rivera, Jorge Posada, Alex Rodriguez and Mark Teixeira in the mid-2010s, no one questioned his leadership. He did manage another postseason finish in 2015, but New York lost the Wild Card Game at home to a great performance by Dallas Keuchel of the Houston Astros.

The 2016 and 2017 seasons were supposed to be rebuilding ones, but the Yankees still posted winning records both years while introducing a new generation of excellent young players led by C Gary Sanchez, OF Aaron Judge and P Luis Severino. In 2017, the Yankees made it to the postseason as the first wild card team, defeated the Minnesota Twins in the Wild Card Game and then upset the heavily-favored Cleveland Indians in the Division Series, in spite of a big mistake by Girardi that cost them Game 2, when he failed to ask for a video review on a hit-by-pitch call on Lonnie Chisenhall. The review would have shown that the ball had deflected off the nub of Chisenhall's bat for a foul tip, and as it was caught by Sanchez, he would have been declared out on strikes. But given a reprieve, Cleveland scored four runs and eventually won the game in extra innings. Still, the Yankees moved on and gave the Houston Astros a scare in the ALCS, winning the middle three games at home to move within one game of the World Series. However, the Astros, were able to regroup to win the final two games at home, ending the Yankees' dream. Girardi should have been rewarded with a new contract for this fine performance that exceeded all reasonable expectations, but there were apparently some underlying tensions with upper management, and on October 26th, it was announced that he would not return in 2018. He was the third manager of a team that had played in that year's postseason to be fired, following John Farrell of the Boston Red Sox and Dusty Baker of the Washington Nationals.

In 2018, he joined the MLB Network as a studio analyst, working on Baseball Tonight telecasts. In 2019, he was named manager of Team USA for the 2019 Premier 12. He stepped down before the tournament, hoping to return to the majors; Scott Brosius took his spot. On October 24th, it was announced that he had been hired by the Philadelphia Phillies to be their manager beginning in 2020.

Girardi is known for an unsentimental managing style. He will not hesitate to change a starting pitcher who is just one or two outs shy of qualifying for a win if he feels the situation demands it, and will not hesitate to bench a fan favorite if he thinks another player would contribute more (both Posada and Alex Rodriguez were at the receiving end of this treatment in their final season). He will play an unheralded youngster instead of a big-salaried veteran who is struggling, and will quickly yank a relief pitcher who has less than excellent stuff: David Robertson was the heir apparent to Mariano Rivera, but when Mo was lost for the year to an ankle injury in 2012 and Robertson faltered in his first few opportunities to close in his absence, Girardi quickly turned to Rafael Soriano. Similarly, when Aroldis Chapman struggled in 2017, he quickly gave way to Dellin Betances, huge contract be damned. But the players know this is the drill, and he is respected for making it clear that the interests of the team always trump those of any individual player.

Girardi missed nearly four months of the 1991 season with a bulging disc in his back. In each of the first three Wednesdays in 1995, Girardi collected four hits.

The two most similar players through 2006, according to the similarity scores method, are Ron Oester and Charlie Moore.