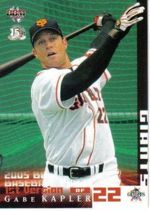 An impressive player in the minors, Gabe Kapler topped 40 doubles a year from 1996-1998, hitting between 19 and 28 homers each season; unusual power for a 20-22 year old. In 1996, he led the Hawaii Winter League with 7 homers. He hit .247 and slugged .462 for the West Oahu CaneFires. In 1998 he was named Minor League Player of the Year by the The Sporting News after batting .322 with a .583 slugging in the Southern League. He scored 113 times, hit 47 doubles, drove in 146 and homered 28 times that year. That year he set the SL record for RBI, breaking the 1986 record of 132 set by Terry Steinbach. He also set league records with 81 extra-base hits and 319 total bases and broke the old double record of 44 - he shared the new two-bagger record with Robert Fick, who also hit 47 that season.

In 2000 Kapler hit .302/.360/.473 and appeared on the verge of becoming a star center fielder. His production slipped the next year then continued to drop off at the ages when many players peak.

After being a backup OF for the World Series champion 2004 Boston Red Sox, Kapler signed with the Yomiuri Giants. He was a total bust, hitting just .153/.261/.217 and was sent down to the minors, then released. He returned to the Red Sox and hit .247/.282/.351 but suffered a ruptured left Achilles tendon on September 14, 2005 and missed the remainder of the season.

Kapler retired after the 2006 season and was hired as the manager of the Greenville Drive. After one year as a manager, Kapler voiced his intention of making a comeback as a player; he fulfilled this intention by signing a one-year contract for 2008 with the Milwaukee Brewers and making the team in spring training. He later played for the Tampa Bay Rays and retired for good after the 2010 season.

In November of 2014, he joined the Los Angeles Dodgers organization as Director of player development. On October 30, 2017 he was named manager of the Philadelphia Phillies for the 2018 season, succeeding Pete Mackanin. His only managerial experience at the time he was hired was the one-year interlude he had taken back in 2007 before returning to the playing field.

In his first game as a major league manager on March 29th, he was heavily criticized for his decision to pull his starting pitcher Aaron Nola after 5 1/3 innings and just 68 pitches, with a 5-0 lead over the Atlanta Braves. The move blew up in his face as the Phils ended up losing the game, 8-5. Two days later, on March 31st, he attempted to make a pitching change in the 3rd inning against the Braves, even though the reliever he wanted to bring in, Hoby Milner, had barely begin warming up in the Phils' bullpen. He attempted to stall to give his pitcher more time, but umpire Jerry Layne simply reduced the number of warm-up pitches Milner was allowed to take from 8 to 5. Even that was not enough for Braves manager Brian Snitker, who argued Milner should have been docked all of his warm-up tosses; Layne disagreed and ejected him. The Phillies lost that game, 15-2. He was criticized for his penchant to overwork his bullpen, as he used 21 relievers - including back-up infielder Pedro Florimon - over his first three games, asking them to log 28 innings, a pace that was clearly unsustainable. He quickly got to appreciate that Philly's reputation for having unforgiving fans was not exaggerated, as he was booed before the team's home opener on April 5th. But things soon got better after that rough start and the Phils finished April with a winning record, something not seen for a number of years.

The two seasons during which Kapler was the Phillies' manager were similar. Things started off well and the team was in contention, as had been expected, but then they stalled at some point and let others like the Atlanta Braves and the Washington Nationals pull out ahead of thenm, finishing around .500 and well out of the postseason picture. This was particularly painful in 2019 given the team had splurged in the off-season, signing Bryce Harper and trading for J.T. Realmuto among other moves that indicated a willingness by top-level management to pull out all the stops to be competitive. Kapler paid the price after the season, being dismissed on October 10th. Barely one month later he was hired to replace the retiring Bruce Bochy as manager of the San Francisco Giants in 2020.