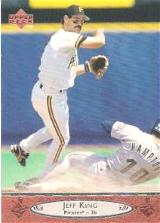 Jeff King was the first overall pick in the 1986 amateur draft. Considered a disappointment early on, he emerged as a productive player later in his career.

King's father, Jack King, was a minor league catcher in 1954-1955, and his brother, James King, was drafted by the Philadelphia Phillies in 1982 and the Seattle Mariners in 1984.

Jeff was taken by the Chicago Cubs in the 23rd round of the 1983 amateur draft but did not sign. In 1985, King emerged as a top prospect as a college sophomore. He hit .366/?/.701 for the University of Arkansas and was the only sophomore on the Baseball America All-American first team. He tied for third in NCAA Division I with 26 doubles and tied Boi Rodríguez for 18th in NCAA Division I with 82 RBI. He tied Kevin McReynolds' school record of 17 homers. He made the 1985 College World Series All-Tournament team at third base. King followed with an impressive summer, splitting the Baseball America Summer Baseball Player of the Year Award with Bob Zupcic. Playing for the USA national team, King hit .378/~.412/.714. He led the team in average, slugging, home runs (12) and runs (38), outperforming Matt Williams among others. The USA struggled in the 1985 Intercontinental Cup, finishing sixth of eight. Omar Linares was the easy choice as All-Tournament third baseman; the IBAF website does not list King's batting line for the tourney.

As a junior, King batted .369/?/.802. Baseball America named him second-team All-American behind Robin Ventura while he was chosen as a first-team American Baseball Coaches Association All-American, having failed to take that nod the year prior when Baseball America had made him first-team. He again tied the school record of 17 homers and set school marks for career home runs (42) and RBI (204). The Sporting News named him its College Player of the Year.

The Pittsburgh Pirates drafted King with the first pick of the 1986 amateur draft, ahead of Williams, Gary Sheffield and Roberto Hernández, but the primary complaint of Pirates fans for the next few years would be that they did not take Greg Swindell, who went second and quickly rose to major league success, while King took time to develop. In the long run, the decision seems to have been a perfectly rational one and one that panned out fairly well for a #1 overall pick.

After signing with scout Buzzy Keller, King debuted professionally with the 1986 Prince William Pirates, hitting .235/~.331/.417, a year after a fellow 1st-round pick, Barry Bonds, had broken in there. In 1987, he started off strong with the Salem Buccaneers, batting .277/~.396/.565 with 26 homers, 68 runs, 71 RBI and 61 walks in 90 games. Had he qualified, he would have led the Carolina League in slugging, 26 points ahead of Leo Gómez. He finished second in home runs behind Hensley Meulens (28). King was moved to first base due to shoulder problems. Rob Sepanek beat him out for the Carolina League All-Star team at 1B. Baseball America did not rank him among the league's top 10 prospects. For the final month of the season, he was promoted to the Harrisburg Senators, placing him on two pennant-winners in a single season. King hit .240/~.269/.370 in 26 games for Harrisburg, at first base.

King started 1989 with the Buffalo Bisons and hit .254/~.308/.414 with a surprising 7 steals in 51 games. When Sid Bream was injured, King was called up to split first base duties in Pittsburgh with Gary Redus and Benny Distefano. Jeff played every infield position for the Pirates, batting .195/.266/.353; half of his hits went for extra bases but he was not making sufficient contact.

In 1990, the Bucs brought in Wally Backman to play third alongside King, moving Bobby Bonilla to right field. King started slowly before finishing with a .245/.283/.410 batting line with 14 HR in 371 AB. He even hit leadoff at times, filling in where needed. In the 1990 NLCS, he was just 1 for 10 with a walk and five strikeouts. He sat out Game 5 with a back problem and Barry Bonds criticized him for not playing through the pain.

King's back got worse in 1991. The opening day starter at third, he was on the Disabled List after two games. He only played 33 games for the Pirates that year (batting .239/.328/.376 for his first 100 OPS+) and 9 games for the Buffalo Bisons (4 for 18, 7 total bases, 6 walks) all year. Pittsburgh was forced to move Bonilla back to third, later trying call-up John Wehner (who was a major surprise in limited time) and getting veteran Steve Buechele via trade to try to fill the gap.

King was healthy again in 1992, but Buechele and Wehner got significant time at third, forcing King into a utility role once more. He played 130 games, with at least 30 at 1B, 2B and 3B. He batted .231/.272/.371; his 14 homers were tied with Andy Van Slyke for second on the NL East champions but his 82 OPS+ was unimpressive. He also played 7 games for Buffalo, his last time in the minors, going 10 for 29 with 18 total bases and two walks. He hit into an unassisted triple play on September 20th against the Philadelphia Phillies. Mickey Morandini was the fielder for the Phillies. In the 1992 NLCS, Jeff played at third base every game and usually hit 5th. He batted .241/.241/.379.

King battled injury again the next year, 1994, his worst as a MLB regular (79 OPS+). He hit .263/.316/.375 with only 5 home runs for the Pirates. As he usually hit 4th or 5th, Pittsburgh sportswriter Bruce Keidan poked fun at a cleanup hitter who averaged one home run per month.

King was hitting more like a cleanup hitter should in 1995 with 18 home runs and 87 RBI. He was second in the NL in sacrifice flies (8), trailing only Jeff Conine. After two years at third base, King was bouncing around again, alternating between third and first. His 107 OPS+ was his best-yet. On August 8th, he became the first Pirate in 102 years to hit two home runs in one inning. Jake Stenzel had done so in 1894.

Signing a deal that was considered to be less than market value, King moved to first base to begin 1996 at his request. Veteran Charlie Hayes was picked up to fill the gap at third. Jeff had his best offensive year that season with a 117 OPS+. He hit .271/.346/.497 with 36 doubles, 30 home runs, 91 runs, 70 walks, 111 RBI and 15 stolen bases in 16 tries. When Carlos Garcia was injured, King also saw 71 games at second base, with a fielding percentage and range factor around league average. He only finished in the top 10 in the league in sacrifice flies (8) but was only 2 RBI behind #9 Derek Bell and Vinny Castilla and clearly led the Bucs in homers, walks and slugging. King again hit two home runs in one inning that year, on April 30th. He was the third major leaguer to twice hit two home runs in one inning during his career, after Willie McCovey and Andre Dawson.

King was then traded to the Kansas City Royals with Jay Bell for Joe Randa, Jeff Wallace, Jeff Granger and Jeff Martin in a 3-for-1 Jeff deal reminiscent of a trade involving the man whose Arkansas home run record King tied - Kevin McReynolds had once been traded for three Kevins. The move was part of an attempt by Pirates management to deal away expensive veterans while still productive to acquire young talent. Overall, this trade was more or less a wash, as Randa had one good year for Pittsburgh and Bell one good year in Kansas City while King faded from his 1996 peak. None of the three pitching prospects panned out.