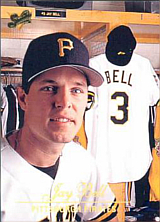 Shortstop Jay Bell was one of the first players signed by the expansion Arizona Diamondbacks. He played 18 years in the big leagues, primarily as a shortstop.

Signed as a first rounder by the Minnesota Twins and scout Fred Waters in 1984, by 1986 Jay had broken into the majors with the Cleveland Indians after being dealt to the Tribe (along with three other young players) for Hall of Famer Bert Blyleven in 1985. In 1986, Bell hit a home run in the first plate appearance of his career; the pitcher was... Bert Blyleven. At age 22, Jay was the starting shortstop for the 1988 Cleveland Indians. From 1989 to 1996 he was with the Pittsburgh Pirates. He hung around longer than teammates Bobby Bonilla and Barry Bonds, who left the team in 1991 and 1992, respectively. The Pirates were division winners three consecutive seasons, from 1990 to 1992. Jay was often used as the team's number two hitter and, in an unusual strategy for the time, manager Jim Leyland often asked him to bunt; as a result, he led the National League in sacrifice hits in 1990 and 1991 and finished second in 1992. When he led the league with 39 sacrifice hits in 1990, it was an unusually high total: only he and Bert Campaneris had recorded so many in a season since 1930.

Bell began to show power late in his career. In 1997, his only year with the Kansas City Royals, he hit over 20 home runs for the first time in his career (his previous high was 16 in 1991). In 1999 with the Diamondbacks, he hit 38 home runs at age 33, and drove in over 100 RBI for the only time in his career. He was an All-Star with the Pirates in 1993, a year in which he won his only Gold Glove, and also was an All-Star with the Diamondbacks in 1999. Other than leading the league twice in sacrifice hits, he never led the league in any category, although he was second once in runs scored, third once in doubles, third once in triples, and third once in sacrifice flies. Bell was the ninth and last player to have at least 150 home runs and at least 150 sacrifice hits. The first eight all made their debuts between 1912 and 1926; Bell debuted in 1986. Because of the power surge late in his career, the most similar players to Bell, based on the similarity scores method, are seen as Ray Durham, Bobby Grich and Toby Harrah. His OPS+ of 101 is lower than theirs, though.

Bell was a coach with the Diamondbacks from 2005 to 2006. He coached for Team USA in the 2010 Pan American Games Qualifying Tournament, 2011 Baseball World Cup and 2011 Pan American Games. In 2012, he returned to the Diamondbacks as hitting coach of the AA Mobile BayBears. In 2013, he was named hitting coach of the Pirates, then in 2014 moved to the Cincinnati Reds as bench coach for new manager Bryan Price, staying until the end of the 2015 season. In 2017, he was named manager of the Tampa Yankees in the Florida State League, moving up as skipper for AA Trenton in 2018 and AAA Scranton/Wilkes-Barre in 2019. Moving to the Los Angeles Angels' organization, Bell was scheduled to be the inaugural manager of the Rocket City Trash Pandas in 2020 before the season was cancelled due to Covid-19.

Bell is the father of minor leaguer Brantley Bell. Jay was Brantley's manager with the Scottsdale Scorpions in the Arizona Fall League in 2017. Another son, pitcher Brock Bell, was drafted in the 7th round in the 2019 amateur draft.