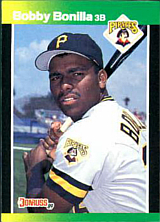 "When you're 6 feet 3 and swish the bat menacingly across the plate in a low golfer's arc, then rock back, hands low, swaying just a touch to some internal rhumba, it brings back memories of those great right-handed line-drive hitters. . . It's just as rare when a player reminds the game's oldsters of both Willie McCovey and Willie Stargell." - prose by Thomas Boswell, writing in the Washington Post in 1988 about Bobby Bonilla 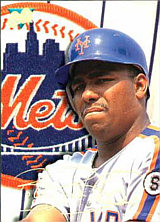 Bobby Bonilla, who was the highest-paid player in baseball during most of his time with the New York Mets in the early 1990s, had a 16-year career in the major leagues. He was second in the MVP voting in 1990 behind teammate Barry Bonds, and third in the voting in 1991 behind Terry Pendleton and Bonds.

Bonilla was not drafted out of high school and, since he had talent with computers, attended technical college for a while. Signed by the Pittsburgh Pirates in 1981 as a free agent after being discovered at a baseball clinic in Europe, he suffered an injury in 1985 and was selected from the Pirates by the Chicago White Sox in the 1985 Rule V Draft. He started the 1986 season with the Pale Hose before going back to the Pirates in a trade. The White Sox had a team on-base percentage of only .309, and Bonilla's .361 was one of the highest on the team. He hit his first home run off future Hall of Famer Phil Niekro. Originally an outfielder and first baseman in his first season in the majors, he became a third baseman in his second year. He ended up playing 957 games at third base with good range, 889 in the outfield, and 125 at first base in his major league career.

Bobby became a star with the Pirates, but received his highest income from the Mets as a highly sought free agent in the 1991-1992 offseason. During his prime, he murdered Chicago Cubs pitching like no one else; he loved to hit at Wrigley Field. Later, in 1996 he drove in 116 runs for the Baltimore Orioles as a right fielder and, in 1997, was the third baseman on the World Series champion Florida Marlins, with the highest batting average among the regulars on the team during the regular season. During the 1997 World Series, he hit in the clean-up spot during the first six games, behind Gary Sheffield in the lineup. Bonilla was dropped to the #6 spot for Game 7, in which he hit a key home run in the 7th inning to tie the game. Similarity scores shows the most similar player to Bonilla as Fred Lynn, with the second most similar being Raul Ibanez.

He reached an unusual deal with the Mets when they decided to cut him in 2000 while he still had $5.9 million due him. Instead of taking the money in a lump sum payment, his agent, Dennis Gilbert, negotiated a deal to receive the amount in deferred annual payments, starting in 2011. Thus, on July 1st of every year, a day known as "Bobby Bonilla Day" to Mets fans, he receives a check for $1.193 million, something that will last until 2035, for a total payment of $29.8 million over 25 years (35 if the ten-year grace period is counted). This may seem outrageous - and writers seeking cheap headlines are not shy about bringing up the deal every year when the payment is made - but it is in fact based on a calculation of the net present value of the amount that was due him back in 2000. In effect, Bonilla was making a loan to the team at an interest rate of 8% with a ten-year grace period and an extended repayment period. Based on economic conditions prevalent at the time, had the amount been paid in full in 2000 and invested, its estimated value in 2035 would have been similar to what Bonilla will eventually receive, and possibly superior. However, because of the bank crisis of 2008 and the collapse of the rate of return on most investments, the deferred payment ended up being worth a lot more than what a one-time payment would have been, making Bonilla seem like a genius and a hero to those who would love to have a free large paycheck every year. For the Mets, there were fiscal advantages to deferring the amount over an extended period, so there is no need to shed a tear for them.

Bonilla was prominently featured in Bob Klapisch and John Harper's chronicle of the 1992 Mets season, The Worst Team Money Can Buy. In response to his portrayal in the book (including a graphic description of the day Bonilla called the press box during a game to challenge an error charged to him at Shea Stadium), he threatened to show Klapisch the Bronx. In other media, Bobby was the 1995 MTV "Rock-n-Jock" softball co-MVP. He established the Millie and Bobby Bonilla Public School Fund and appeared on the FOX cop series New York Undercover. His son, Brandon Bonilla, was drafted by the Baltimore Orioles in 13th round of the 2016 Amateur Draft.

He had a cameo in the movie Rookie of the Year and has had brief roles in at least three television show episodes, not all as himself.