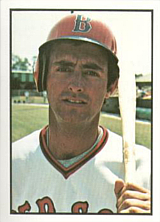 "Lynn is the most complete player in our league." - Roy Hartsfield

"I really didn't have any holes in my game other than the fact that I couldn't stay on the field for the second half of my career." - Fred Lynn, musing on his career 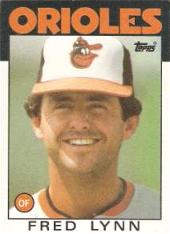 Fred Lynn made a spectacular big league debut, becoming the first player ever to win baseball's MVP and Rookie of the Year awards in the same year, earning the honors in the American League with the Boston Red Sox in 1975. Only Ichiro Suzuki, a seven-time batting champion and three-time MVP in Japan before arriving in Seattle as a 27-year-old veteran, has duplicated Lynn's feat in either league. Lynn set an AL rookie record with 47 doubles, a league-leading total; this was matched by Miguel Andujar in 2018, but never topped. It was also Lynn's career best mark.

Lynn is the only player to hit a grand slam in the All-Star Game. He accomplished the feat in 1983 off Atlee Hammaker. He was a nine-time All-Star.

The similarity scores method shows the most similar player to Lynn to be Reggie Smith, another center fielder for the Boston Red Sox.

Lynn, while on a team of high school stars that played against the University of Southern California team, faced Dave Kingman, who was a fast-throwing pitcher at the time. He is in both the USC Hall of Fame and the Boston Red Sox Hall of Fame and was a two-time All-American at USC.

Lynn played for Team USA in the 1971 Pan American Games. He led the Games with 4 home runs as the US won Silver. When the US played Gold Medal winner Cuba, Lynn homered in a 4-3 loss.