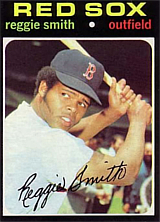 Reggie Smith was one of the most versatile players of his era, and to this day remains one of the most underrated. A seven-time All-Star and Gold Glove winner, his career 64.5 WAR and 53.1 JAWS peak place him ahead of no less than nine center fielders and eleven right fielders in the Hall of Fame. Seven times he topped .300 in batting average in baseball's Second Deadball Era, showing a combination of power, speed, and deft fielding in a seventeen-year career split pretty evenly between center field and right. He made four World Series appearances, once with the Boston Red Sox and three times with the Los Angeles Dodgers, bringing home a ring in 1981. Smith's career 137 OPS+ places him ahead of dozens of Hall of Famers, including such first-ballot icons as George Brett (136), Joe Morgan (132), Jackie Robinson (132), and Roberto Clemente (130).

Smith came up with the Boston Red Sox as a 21 year-old center fielder in 1966, playing just 6 games. He came on strong in 1967 and was runner-up to Rod Carew in the Rookie of the Year contest. Early in his career he batted high in the order before his power and productivity moved him into the heart. He became known for decent power, high batting averages, and good on-base percentages. His range factors in the outfield were excellent, and while his stolen base percentage as a young player was poor it improved to the point where he stole 15 bases in 19 attempts in 1972.

Smith was the Sox's Opening Day starting second baseman on its memorable 1967 AL pennant-winning team, moving back to center field after six games to make way for Mike Andrews; he remained there all but two of his seven full seasons in Boston, splitting 1971 in right and playing all of 1972 there. During his tenure with the Red Sox they were typically near the top of the league, going to the World Series in 1967. He was traded to the St. Louis Cardinals in 1974 in a deal that brought Rick Wise and Bernie Carbo to Fenway Park, where each made substantial contributions to the Sox's mid-to-late 1970s success.

After two very solid All-Star seasons with the Cards, where he hit over .300 with a good on-base percentage and OPS+ numbers in 1974 and 1975, Smith started slowly in 1976. A midseason trade followed to the Los Angeles Dodgers in return for Joe Ferguson and others, beginning a very successful 5 1/2 year stretch in L.A. that saw three World Series appearances culminating with a ring in 1981. 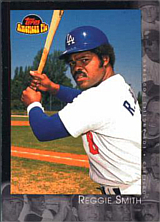 His 1977 season was the most productive, with a .307 batting average, 104 walks, 32 home runs, and NL-topping OBP and OPS+ numbers. He suffered two serious injuries in 1980, needing sixty stitches in his wrist after hitting a cooler during an argument with Derrel Thomas, then suffering season-ending damage to his throwing shoulder while playing right field. Frank Jobe repaired the arm enough that Smith was able to play regularly at first base two years later and eventually return to the outfield. He was limited to 35 at bats in 1981 and made only two appearances on defense, both at first base, but went 1 for 2 in the World Series with a hit in the decisive Game 5 against the New York Yankees.

Smith closed out his Major League career in 1982 with the San Francisco Giants, posting good stats (a .364 OBP and a .470 SLG) as the team's regular first baseman.

Reggie was contacted by the Yomiuri Giants in 1982 but instead went to the San Francisco Giants when Yomiuri refused to disclose finances in detail. The next season, Yomiuri offered Smith three cars and a million-dollar contract, more than doubling what San Francisco had been paying. They also allowed Smith to become the first player in Yomiuri history to have facial hair or a long hair-style (Reggie had an Afro at the time).

It was obvious from the get-go that Reggie's personality was too different from the Japanese norm. He got into arguments with coaches like Isao Shibata and criticized pitchers who would not offer him a pitch in the strike zone. In April of 1983, he injured his knee while sliding and was relegated to the bench for almost two months, earning him the media moniker "Million-Dollar Bench-warmer". While unable to play the field, Smith was used as a pinch-hitter. One game he was in the on-deck circle when the batter doubled. He told manager Motoshi Fujita to let someone else bat instead, as he would be pitched around. Fujita agreed but the media made it into a scandal and called for Smith's release. The argument was made that Smith was encouraging Americans to look down on Japan and was not taking Japanese culture, baseball or business seriously. Additionally, Smith was the target of many racial insults, especially from Hanshin Tigers fans.

While Smith hit well after he was healed, he also struck out a lot and became known as the "Giant Human Fan". He also started to criticize the umpires; like many other gaijin he felt that they employed a double standard, using a larger strike zone for foreign players. Once Reggie intentionally struck out to drive home his point, drawing more criticism for a lack of effort.

In August 1983, Smith donned his uniform backwards with the help of his teammates. He then ran backwards onto the field, stunning the assembled crowd and infuriating his coaches further. When he was ordered off the field and prevented from taking batting practice by Shibata, he came back to hit a three-run homer in that game. Also that month, he became the target of inside pitching by the Hiroshima Carp. Manabu Kitabeppu started a brawl with back-to-back high-and-inside pitches to Smith, for which Reggie got all the blame. Before one game Smith (through an interpreter) addressed the Carp bench, telling them not to throw any more beanballs or insult him. They did not challenge Reggie, who hit a crucial three-run homer in a win that helped the Giants pull away from Hiroshima in the pennant race. Legendary Giants owner Matsutaro Shoriki said that Yomiuri would not have won the pennant without Smith and said that a million dollars was a low price for what Reggie had contributed on the field. Overall, Reggie hit .285/.409/.627 with 28 long balls in just 263 AB. He fanned 61 times and drew 51 walks, for a Three True Outcomes Percentage of 43.3%. He would have led the league in slugging if he had enough plate appearances to qualify for that title.

At age 39, Smith's abilities declined rapidly. He hit .255/.342/.511 in 1984 with 66 K and 17 HR in 231 AB. He injured his wrist, shoulder and knee that season, following a slew of injuries in the US. He also knocked out one Hanshin fan who had been vocal in his racist insults. The next day a gang of Tigers fans attacked Reggie and his son, Reggie Smith Jr. He was charged with and cleared of assault for this latter incident. While Smith was very critical of Japanese baseball (calling it 50 years behind the times and forced labor), he incorporated some of Sadaharu Oh's methods into his coaching with the Los Angeles Dodgers after his retirement. He became close friends with Yomiuri star Tatsunori Hara and thought very highly of Oh.

Smith coached for Team USA in the 1999 Pan American Games, 2000 Olympics and 2007 Baseball World Cup. The Olympic team won Gold, the first time the US had done that. The World Cup team also won Gold, its first such medal in a Baseball World Cup in over 30 years. He was with the US for the 2008 Olympics, when they won Bronze.

If anything is a knock against Smith it is lack of durability. He played numerous partial seasons during his seventeen-year career, seven times appearing in fewer than 120 games and failing to reach 150 even once the last eleven.

However, his statistics are also strongly dampened by the era he played in. As a result, modern fans are shocked to learn that Smith's career 137 OPS+ places him ahead of dozens of Hall of Famers, including such first-ballot icons as George Brett (136), Al Kaline (134), Joe Morgan (132), Tony Gwynn, Jackie Robinson (132), and Roberto Clemente 130.

Reggie is a member of the Boston Red Sox Hall of Fame, having been inducted in 2000.

Source: "You Gotta Have Wa" by Robert Whiting