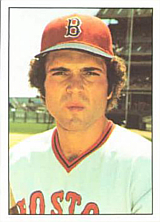 "And I said, 'Hey, I’m not going to hit. Juan Beníquez, grab a bat, you’re going to hit. Sparky's [Anderson] going to go to the left-hander because Sparky goes by the book.' Darrell [Johnson, Red Sox manager] said, 'Well, go up and stand on the on-deck circle.' And they introduced me. So I’m still thinking Sparky will come out and take Rawly Eastwick out and go with Will McEnaney. But the umpire says, 'C’mon, you’ve been announced, you’re hitting.' So I go into the batter's box. I ain’t ready to hit. Next thing, strike one, strike two, ball one, ball two. Then he threw me a cut fastball, a little slider and I took it right out of [Johnny] Bench's glove — the ball just dribbled out. I step out and I’m thinking, 'Aw man, I almost struck out. I was lucky.' I hit the next pitch to center field. I rounded first base and I saw César Gerónimo going back. Rounding second, I knew it was gone and I’m yelling to Pete Rose, 'Don’t you wish you were this strong?' And Pete is yelling back, 'Ain’t this fun, Bernie? This is what the World Series is about. This is fun.'" - Bernie Carbo, remembering Game 6 of the 1975 World Series

Bernie Carbo played a dozen years in the majors. He is best remembered for his heroics for the Boston Red Sox in the 1975 World Series.

Selected by the Cincinnati Reds in the first round of the inaugural amateur draft (ahead of future Hall of Famer Johnny Bench), Carbo hit .359 with 21 home runs for the Indianapolis Indians in 1969 and was named American Association Most Valuable Player. That performance earned him a September call up, and he went 0-for-3 with a pair of strikeouts. He became Cincinnati's regular left fielder in 1970 and hit .310 with 21 homers. He was named The Sporting News Rookie of the Year and finished second to Carl Morton in National League Rookie of the Year voting. He went hitless in 14 postseason at-bats as the Reds lost the World Series to the Baltimore Orioles. Carbo struggled in 1971, hitting just .219 with 5 home runs, and was traded to the St. Louis Cardinals for Joe Hague the next year.

Following the 1973 season, he was dealt to the Boston Red Sox. With Boston, he had a bit of a resurgence, clubbing 12 homers in 1974 and 15 in 1975 as a fourth outfielder, part-time DH and pinch-hitter. The Red Sox went to the World Series in the latter season, and Carbo went 3-for-7 with a pair of pinch homers in the Fall Classic against the Reds; one was a three-run homer off Rawly Eastwick that tied the score in the legendary Game 6 and helped send it into extra innings, where it would be won on Carlton Fisk's supremely famous home run. Traded to the Milwaukee Brewers during the 1976 campaign, Carbo was sent back to Boston following the season. He later played for the Cleveland Indians, St. Louis Cardinals, and Pittsburgh Pirates, and played in the Detroit Tigers farm system in 1981. He was out of the majors by 33.

Following his big league days, Carbo played for the Winter Haven Super Sox of the Senior Professional Baseball Association in 1989. In 43 games, he hit .263. He later managed the Pensacola Pelicans from 2003 to 2005. In 2004, Bernie was inducted into the Boston Red Sox Hall of Fame.

Carbo was one of the first fashion-conscious players of his era and one of only a few in his day to use a portable hair "blow dryer" in the locker room.