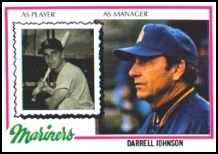 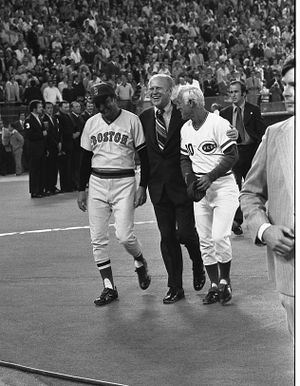 Catcher Darrell Johnson played parts of six seasons in the majors with seven clubs. In 1960 and 1961, he was a player/coach with the St. Louis Cardinals, and he was also a member of the Baltimore Orioles staff while playing for them in 1962.

Johnson became manager of the Boston Red Sox in 1974 and led the team to the 1975 World Series, which they excruciatingly lost in seven games to the Cincinnati Reds. After being fired the following season, he was hired as the first skipper of the expansion Seattle Mariners in 1977. He managed to have the Mariners finish ahead of the Oakland Athletics their first season, but the team failed to improve after that promising start and he was fired after three and a half seasons. He joined the Texas Rangers coaching staff in 1981. Midway through the 1982 season, he was promoted to the club's manager, replacing Don Zimmer (who had ironically succeeded him as manager of the Red Sox in 1976). Following the season, he joined the New York Mets as a scout, and he was a member of their coaching staff in 1993.

Johnson is a cousin of Elliot Johnson's father.

Johnson died of leukemia at age 75.