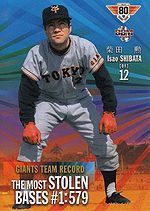 Isao Shibata is similar in many ways to Earle Combs. Both were leadoff hitters and center fielders for the top team in their country's history. Both were stars who were overshadowed by two legends who hit third and fourth - in Combs' case, Babe Ruth and Lou Gehrig, while Shibata was outshone by Shigeo Nagashima and Sadaharu Oh. Shibata won five Gold Gloves (though they were only awarded for the latter half of his career), was a 12-time All-Star, 4-time Best Nine and six-time league leader in stolen bases in his dazzling career. Unlike Combs, he did not make his country's Hall of Fame.

Shibata was a star pitcher in high school. His team won two Koshien Tournaments and he went 10-1 in Koshien play. He made six appearances as a rookie pitcher in 1962 for the Yomiuri Giants but went 0-2 with a 9.82 ERA, allowing five home runs in 11 innings. He never pitched again in 20 years with the club.

Shibata batted .253/.343/.408 in 1964 with 86 runs, 15 home runs, 68 walks and 50 steals in 61 tries. He was seven steals behind the leader, Takeshi Koba and again was an All-Star. In 1965, Yomiuri started their run of nine straight Japan Series; the "V-9" Giants are considered the greatest dynasty in Nippon Pro Baseball history. Led by Nagashima and Oh, the team had no foreign players those years.

In either 1968 or 1969, Shibata did not switch-hit, instead batting solely from the right side.

In the 1969 season, he hit .228/.310/.355 and went 35-for-45 in steals, leading the league in swipes. He missed an All-Star team for the first time since he became an outfielder. One bright spot was that he hit cleanup, the only Giant other than Oh and Nagashima in the many years tthose two were on the club. He struggled in the 1969 Japan Series, going 1 for 12 with no walks and getting caught in his only attempt to steal.

Isao batted .293/.393/.394 in 1972 for the best OBP of his career. He scored 88 runs, stole 45 bases in 64 tries and drew 73 walks with only 48 strikeouts. It was his 5th and last time leading the league in times caught stealing and his 4th time leading in steals. His eight triples also led the league, as did his 107 singles. He made his third Best Nine and was sixth in the CL in average. In the first year the Diamond Glove Award was given out, he was one of the awardees. In the 1972 Japan Series, Yomiuri won their 8th straight title and he hit .095/.174/.095 with two steals.

Shibata coached for Yomiuri after his retirement. In this role, he ran into conflict with Reggie Smith. Shibata was the club's outfield coach and was doubtful of Smith's defensive skills. He hit numerous flies just out of Smith's reach in one practice session, with Shibata and the Japanese media laughing at the results. Smith felt that the exercise was being done for Isao's amusement rather than useful practice. Reggie eventually called off the drill. It was the first of numerous run-ins for Smith with the Japanese press and management during his time there.

Later, he became a baseball commentator for Fuji TV.

"Isao Shibata was a little, pesky, aggravating son-of-a-gun. He would just get on base, and he was quick, so you know he'd run." - Hanshin Tigers pitcher Gene Bacque