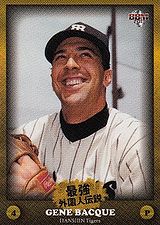 Arguably the most successful American pitcher in the history of Nippon Pro Baseball, Gene Bacque was not nearly as successful in his homeland. After his sophomore year at the University of Louisiana at Lafayette, Bacque signed with the Detroit Tigers. As a rookie in 1957, he went 0-9 for three minor league teams. He spent all of 1958 for the class C Idaho Falls Russets and did okay, going 11-8 with a 3.94 ERA. It was his only winning season in America. He was 6-9 in the Carolina League and South Atlantic League in '59, 8-14 in the SAL and Southern Association in 1960 and the next year he went 9-12 with a 5.40 ERA for two teams in the AA Southern. He pitched briefly in AAA in '62 and got no decisions. Overall he had gone 34-52 in the minors.

The Tigers finally released Bacque in 1962 after he had pitched for the Hawaii Islanders. After playing semipro ball for a while, the 25-year old hurler got a workout with the Hanshin Tigers in July. Though he tried out for the Tigers' minor league club, they were impressed with his performance as a pitcher and as a batter (he hit just .171/.189/.251 in Japan, but slugged 9 homers in 537 AB). Hanshin signed Bacque and put him on their roster as soon as he could arrange a visa for him and his wife. He was 0-3 that year with a 4.70 ERA and pitched briefly in the Tigers' Japan Series victory.

Bacque improved in '63 and went 8-5 with a 2.49 ERA; he would have been fifth in the Central League in ERA had he pitched enough innings to qualify.

In 1964 Bacque was given a more prominent role after the team traded Masaaki Koyama and had a career year. He went 29-9 with a 1.88 ERA in 353.3 innings. His ERA was .35 ahead of the next competitior and he led the league in wins. His 200 strikeouts ranked second to Masaichi Kaneda and he led the league in innings and complete games (24 in 38 starts). He was named to the Best Nine and became the first American to win the Sawamura Award (it would be 52 years before Kris Johnson was the second). He made the first of five consecutive All-Star teams. The Tigers won a second Japan Series that season; after that no Central League team was able to beat the Yomiuri Giants until 1974.

Bacque slipped in '65 to 18-14, 2.28 after his magical '64; he finished 7th in the league in ERA. He had what he calls "[t]he highlight of my career in Japan" that year when he pitched a no-hitter against Yomiuri. The next-to-last batter was Sadaharu Oh in the nationally televised game.

In 1968 Bacque made his final All-Star team. He finished 4th in the Central in ERA (2.19, his second best in Japan) and his 142 strikeouts were his second-best for Hanshin but he went just 13-14 with continued poor support. Bacque also got into his biggest controversy in Japan that year. With Oh at the plate in a key situation, Bacque went ahead 0-1 then threw one inside. He came inside with the following pitch as well and Oh began criticizing Bacque. The Giants' dugout then began to empty and Bacque was knocked down in the fight and broke his thumb punching Yomiuri coach Hiroshi Arakawa; the imprint of Arakawa's forehead was permanently embedded on Bacque's knuckle. Masatoshi Gondo relieved Bacque - and promptly hit Oh to restart the melee. Bacque was fined, missed the rest of the season and after the season he was traded to the Kintetsu Buffaloes.

Bacque went 0-7 for Kintetsu and was one of many Buffaloes to complain about the managerial tactics of Osamu Mihara. He ruptured a disc that year, ending his career. In Nippon Pro Baseball Bacque had gone 100-80 with a 2.34 ERA; he is tied for the most wins by an American with Joe Stanka.

After retiring from baseball, Bacque returned to the states with his wife and kids and became a teacher in Louisiana. After he retired from teaching, he ran a cattle ranch in his home state.