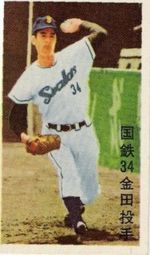 A Japanese-born Korean, pitcher Masaichi Kaneda struck out 4,490 and won a Japanese record 400 games in his career. His younger brother is Tomehiro Kaneda. He made his NPB Debut on August 23, 1950.

His number 34 is retired by the Yomiuri Giants for whom he pitched from 1965 until his retirement in 1969, a period during which they won the Nippon Series every year. Prior to that, he was with the Kokutetsu Swallows for 15 years. The Swallows were a terrible team that only had one winning season during his time there. After his retirement, he managed the Lotte Orions from 1973 to 1978. In 1974, he led them to a win in the Nippon Series, breaking the Giants' run of nine consecutive titles that had started when he joined them in 1965.

This page is in need of some additional content. Please help the Bullpen by expanding it, or learn how to contribute.
Retrieved from "https://www.baseball-reference.com/bpv/index.php?title=Masaichi_Kaneda&oldid=1108950"
Categories: