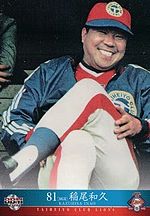 Kazuhisa Inao was one of the greatest pitchers in the history of Nippon Pro Baseball. He went 276-137 with a 1.98 ERA in a career that ran from 1956-1970 despite going 42-43 his final five years. He ranks in the top 10 in NPB history in wins, games pitched, innings pitched, strikeouts and ERA. He is most famous for winning four straight contests in the 1958 Japan Series to give the Nishitetsu Lions the title. The chant "kamisama, butsusama, Inao-sama (G-d, Buddha, Inao)" began with his heroics in 1958.

Inao was the youngest of seven kids. He accompanied his fisherman father on his small boat, helping build his strength. In sixth grade, he began playing baseball, with a local sandlot team, as a catcher. He became a pitching star in high school.

After high school, Inao signed with the Nishitetsu Lions for a signing bonus of $1,538 and a salary around $1,300. Inao's father made him promise that he would join him in the fishing business if he wasn't a success in baseball within three years.

As Inao was not deemed a hot prospect by manager Osamu Mihara so Mihara used him to throw batting practice, tossing about 480 pitches most days. Pitching coach Tokuji Kawasaki was impressed by Inao's work and the rookie made the Opening Day roster. He debuted on Opening Day, 1956, throwing four shutout innings of relief of Hisafumi Kawamura after entering with a 11-0 lead. On April 5, he got his first start and held the Takahashi Unions to 3 hits and no runs in 7 innings. He got his first win on May 20 and promptly began his career 8-0. No other pitcher would match that run to start a career until Hisashi Aikyo 50 years later and no one in NPB would top it until Rick van den Hurk in 2015. Overall, he was 21-6 as a rookie with a 1.06 ERA. In 262 1/3 innings over 61 games, he allowed only 153 hits and two homers. He led the Pacific League in ERA, setting a single-season record that has not been broken in over 50 years since. His 18 games pitched in a month were a PL record; Naoya Masuda tied it in 2013. Inao was honored as the PL's Rookie of the Year and helped Nishitetsu to a close pennant. He continued to shine in the postseason, going 4 for 9 with a double and going 3-0 with a 2.38 ERA while pitching in every game in the 1956 Japan Series to help Nishitetsu win its first Japan Series title. It would be 60 years before another pitcher appeared in six straight Series games; they were Takeru Imamura and Jay Jackson, who did not fare as well at 0-2.

Inao was invited to many parties following 1956 but could not abide the heavy drinking that accompanied them. To avoid such parties gracefully, he adopted the tactic of suggesting a round of golf first, in order to wear out the participants so they would not be as interested in drink. In following years, he would spend the off-season on workouts rather than partying.

Inao developed a reputation as a ladies' man. He would go bar-hopping with roommates Yasumitsu Toyoda and Futoshi Nakanishi. When Inao met a girl he was interested in, he told his teammates he would return to the team dormitory. After they went on to another bar, Inao returned to see the girl again. He later would settle down and became a father of four daughters.

Inao was equally dominant in 1957. He set a Pacific League record with 35 wins and set a NPB record with 20 consecutive wins. The 20 wins came in a 76-day stretch in which Inao threw 10 complete games, four other starts and 17 relief appearances. He shattered the PL record for consecutive wins, held by Shoichi Ono (13). The mark stood for 56 years before Masahiro Tanaka broke it. He made his first Pacific League All-Star team. Overall, he was 35-6 with a 1.37 ERA. In 68 games and 373 2/3 IP, he allowed 243 hits while striking out 288. He led the league in wins, ERA, innings pitched and games pitched. He made his first Best Nine and won his first MVP award; only Eiji Sawamura and Inao have won a MVP at age 20 in NPB through 2007. He was 2-0 with a 2.50 ERA in the 1957 Japan Series to help Nishitetsu win a second straight title.

Inao's father was diagnosed with cancer in the 1957-1958 off-season. Inao was able to take out a loan from Nishitetsu's owner to help buy a house for his parents before his father died. The elder Inao died early in 1958. Inao wore a pendant with his father's picture during the season. That year, the hurler also worked on two new pitches, a slider and shuuto. After a 16-9 first half, Inao went 17-1 in the second half to finish 33-10 with a 1.42 ERA. He led the PL in innings (373), wins, strikeouts (334), games pitched (72), ERA and hits allowed (269) to win the pitching Triple Crown. He was again an All-Star and Best Nine selection.

Inao had a 104 degree fever five days before the 1958 Japan Series began and was unable to practice. He was roughed up in Game One, a 9-2 loss. Inao lost game 3 1-0 to Motoshi Fujita, with Tatsuro Hirooka driving in the lone run. Inao got the call in game four and won 6-4. In game five, Inao came out of the bullpen for a win. In game six, the right-hander threw a 3-hit shutout to tie the Series. Inao was called on in game seven and had a shutout going into the bottom of the 9th when Shigeo Nagashima homered; Nishitetsu still won, 6-1. Overall, he was 4-2 with a 1.53 ERA in the Series. In 47 innings, he struck out 32 and allowed 30 hits and 4 walks. At the plate, he was 2 for 13 with 3 walks and a homer and 3 RBI. He won Series MVP honors.

In the offseason, Inao was 1-3 with a 6.62 ERA against the St. Louis Cardinals. He got one of two Japanese wins in a 16-game series against St. Louis.

Inao had another big year in 1959, going 30-15 with a 1.65 ERA. He struck out 321 in 402 1/3 IP over 75 games. He made the PL All-Star team and won his 22nd straight game against the Kintetsu franchise, a NPB record. He led the PL in games pitched, innings, hits allowed (300), homers allowed (14) and complete games (23 of 30 starts). He lost the ERA title, MVP award and his PL record for wins to Tadashi Sugiura, who suddenly supplanted him as the league's brightest star and then matched Inao's postseason heroism. Inao became distraught and spent a few days golfing before trying to refine his pitching. He had long discussions with teammates about hitting approaches and added a curveball to his expanding repertoire.

Inao was 20-7 with a 2.59 ERA in 1960, an excellent mark for anyone else, but a decline from his prior years. He did not make the All-Star team or lead the league in anything. He fell to 8th in the PL in ERA. In exhibitions against the San Francisco Giants, he was 0-2 with a 3.97 ERA.

Inao more than doubled his win total with an excellent comeback year in 1961. He went 42-14 with a 1.69 ERA. He completed 25 of 30 starts, 7 of them shutouts, and also relieved 48 times. In 404 innings, he allowed 308 hits and struck out 353. He made the PL All-Star team. He set still-standing Pacific League records for innings pitched and strikeouts. He broke Masaichi Kaneda's NPB record for strikeouts. He tied Victor Starfin's 22-year-old NPB record for wins, which has not been broken. Inao was believed at the time to have set the record as Starfin was credited with 40 wins and Inao was given a trophy for supposedly breaking the record. He set the NPB record for games pitched as well, a mark that stood well into the era of modern relief pitchers. In 2005, Kyuji Fujikawa finally broke Inao's games pitched record. Inao led the PL in complete games and ERA in addition to all his records. He made the All-Star team and Best Nine. Inao had won over half of Nishitetsu's 81 victories that year.

With Nishitetsu short on cash, Inao became pitching coach in addition to ace pitcher in 1962 while Nakanishi was the new manager. Inao fell to 25-18, 2.30 and was second to Osamu Kubota in ERA. He became the 9th pitcher in NPB history to reach 200 career wins and made his sixth All-Star team. He led the league in innings pitched (320 2/3), complete games (23), home runs allowed (27) and shutouts (6), surprisingly the only time he led in whitewashes. He also was named to the Best Nine once more.

Against the Detroit Tigers in exhibition play, he had no decisions and a 4.50 ERA in three games.

Inao had his last workhorse campaign in 1963. He led the PL in games pitched (74), innings pitched (386), wins (28; he lost 16), batters faced (1,558, 10 shy of his high), strikeouts (226), complete games (24), hits allowed (353, the all-time PL record) and home runs allowed (26). Her was named to the Best Nine and All-Star team, his final time for each honor. Though he was just 26, he would only lead the league once more in any department. He reached 2,000 career strikeouts that year, the second pitcher in NPB history to have done so. He won game one of the 1963 Japan Series but lost game 3. He tossed a shutout against the Yomiuri Giants in game six to even the Series at 3. Called on again the next day, Inao was out of gas as Yomiuri won 18-4 with two homers by Sadaharu Oh as Nishitetsu went down in defeat. He was 2-2 with a 4.15 ERA in the Series.

Inao had thrown over 2,700 innings in eight seasons.

Inao had undergone shoulder problems throughout 1963 and couldn't even throw to home one day while warming up. Inao, Oh and Katsuya Nomura had free tickets from an airline to visit Europe in the off-season. While in Europe, Inao caught a bad cold, which bothered him into spring training. Inao only pitched 11 1/3 innings in 1964 and did not throw at all from July through the end of the year.

Someone decided that Inao should try to throwing an iron baseball so a regular baseball would be light to him. Inao's exercises with this iron baseball likely hampered his comeback even more.

With the Black Mist Scandal striking Japanese baseball and especially Nishitetsu, Inao was thrust into the managerial role to try to save the franchise's reputation. He guided the scandal-decimated outfit to a 43-78-9 last-place finish in 1970 then 38-84-8 and last again in 1971. In 1972, the 35-year-old manager's team was 47-80-3 and last in the PL once more. Inao's club improved to 59-64-7 and 4th place in 1973 and had the exact same record and finish in 1974. His nerves shot, Inao retired from managing the Lions.

Inao became a coach with the Chunichi Dragons after leaving the Lions for the first time. After the Seibu Lions left Fukuoka in 1978, Inao worked with a group of businessmen to try to get a new team into the region. When the Lotte Orions said they would consider it, Inao agreed to become the team's manager.

Inao's Orions were 64-51-15 in 1984, second in the PL to the Hankyu Braves. Inao's players included Hiromitsu Ochiai and Leron Lee. In 1985, Lotte fell to 64-60-6 but again finished second, this time to Seibu, despite a Triple Crown season from Ochiai. Ochiai credited Inao with helping him figure out how pitchers think. Inao's club was 57-64-9 in 1986, finishing 4th. Michiyo Arito replaced him as manager but Lotte would not be competitive again until they brought in Bobby Valentine a decade later.

Inao became a baseball commentator for Asahi TV after retiring. He also ran a small trading company and served on the Sawamura Award committee. In 1993, Inao was voted into the Japanese Baseball Hall of Fame. He managed six years in the Masters League, ending in 2006. Inao also helped Ikenaga get reinstated by NPB 35 years after the Black Mist Scandal ended Ikenaga's career. Inao died after a brief battle with cancer in 2007.