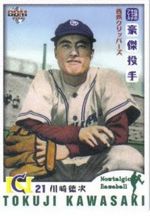 Tokuji Kawasaki was a star pitcher for the Mujun Tanko industrial league team and helped them to a championship in 1940. That spurred the Nankai club into signing the young player, who went 1-4 with a 3.00 ERA late in the year for them. A regular member of the Nankai staff the next two seasons, he went 12-16, 2.32 and 15-17, 2.32. The ERAs were not particularly low for that era in Japan and he was not in the top 10 either season. In 1941 he allowed the most homers (7) in the Japanese Professional Baseball League. His repertoire consisted of a fastball, knuckle curve, sinker and shuuto.

In 1942 Kawasaki was drafted into the Japanese Imperial Army. He served in Burma and was captured during fighting there. Serving time in a POW camp, he wrote a memoir of the experiences of himself and other ballplayers during the war, Senso to Yakyu (War to Baseball).

In 1950 Kawasaki joined the Nishitetsu Clippers and went 12-15 with a 3.43 ERA. He made the Pacific League All-Star team the next year and was 12-9, 2.31, fourth-best in the league. In 1952 Tokuji went 13-11 with a 2.75 ERA; his four shutouts tied Eiji Shibata for the PL lead and he was fifth in the league in ERA. He again was an All-Star. A third All-Star selection followed in 1953, his best season. That year Kawasaki went 24-15 for Kintetsu with a league-leading 1.98 ERA. He led the PL in innings pitched (294 1/3) and wins as well that season. He was selected as the pitcher on the Pacific League Best Nine that year.

After he retired as a player, Kawasaki was hired as a bench coach for Osamu Mihara's Nishitetsu teams and then became the manager in 1960. The Nishitetsu Lions (the name had changed in 1951) went 70-60-6 his first year and 81-56-3 the next. While they finished third and did well both seasons, he did not return to the bench, moving to the front office of the team from 1962 through 1967. He became the Hanshin Tigers pitching coach in 1967.

Kawasaki went into the restaurant business after leaving baseball, running an udon noodle shop in Tokyo and later a coffee shop back in his hometown of Tosu. He died in 2006 of gall bladder cancer.