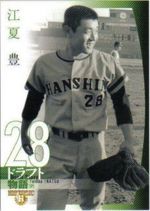 Left hander Yukata Enatsu was one of the top Japanese pitchers of all time. He ended his career with 193 saves, which was a record at the time (later broken by Kazuhiro Sasaki). He was one of the first closers in Japanese baseball history, assuming the role in the late 1970s and winning a record five Fireman of the Year awards. Previously he had won 21, 23, 24 and 25 games as a starter. In 1968 he set the Nippon Pro Baseball record with 401 K's in a season. He also set a record with strikeouts in 23 consecutive innings, which would last 34 years until Chih-Chia Chang broke it. At age 38, he had a tryout with the Milwaukee Brewers; he had been coming off his worst season in Japan. When he failed to make the team, he retired instead of going to AAA.

Enatsu was jailed in 1993 for heroin possession and spent three years in jail.