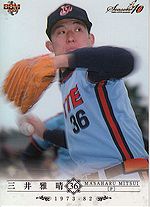 Masaharu Mitsui was a Rookie of the Year in Japan and was the first Nippon Pro Baseball player to have Tommy John surgery.

Unlike John and Murata, Mitsui never returned to his old level of performance. He had one save and a 3.18 ERA in four outings in 1981 and allowed 13 hits and 8 runs in 6 innings in 1982 to end his career.