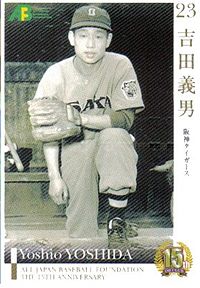 When he retired from playing, he managed the Tigers before moving to France, where he was manager for the French national team from 1989 to 1995. He is now affectionately known as "Monsieur Yoshida" in Japan owing to his time spent in France.

He was named to the Japanese Hall of Fame in 1992, and was one of the inaugural inductees in the Kyoto Sports Hall of Fame by the city of Kyoto, Japan in January 2011.

This page is in need of some additional content. Please help the Bullpen by expanding it, or learn how to contribute.
Retrieved from "https://bpv.baseball-reference.com/bpv/index.php?title=Yoshio_Yoshida&oldid=678236"
Categories: