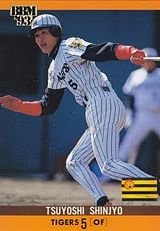 Tsuyoshi Shinjo was known for his funny antics and as one of the biggest fan favorites in Japanese baseball.

After that year, Shinjo became a free agent. He went on to sign with the New York Mets for $200,000, turning down a $2 million deal from Hanshin. Many baseball analysts in America and Japan were surprised at the move, as Shinjo had not shown much offensive talent outside of one shining season. Tsuyoshi immediately responded to the less rigorous approach in MLB when it came to practices. In 2001, he had a respectable year, batting .268/.320/.405 with 10 HR's and 56 RBI and becoming the first Japanese player ever to hit clean-up in a MLB game. He was a fan favorite in New York for his constant upbeat personality and hustle - his visual flair included a pair of bright orange wristbands - but was also the target of criticism for his antics and hot-dogging.

Late that year, Shinjo was traded to the San Francisco Giants with infielder Desi Relaford for pitcher Shawn Estes. In 2002, he fell to .238/.294/.370 with 9 HR and 37 RBI but he became the first Japanese native to appear in the World Series, which the Giants lost to the Anaheim Angels. Still a fan favorite, he was clearly not producing enough offense to play regularly in the majors. That November, Shinjo was released by the Giants. In his final year with the Mets in 2003, he was struggling, being shuffled back and forth between the AAA Norfolk Tides and the Mets and declined to .193/.238/.246. For Norfolk, Tsuyoshi batted .324/.377/.486. Shinjo finished his major league career batting .245/.299/.370 with 20 HR's and 100 RBI. Shinjo collected 107 hits in his rookie season in the majors, and 108 hits the rest of his major league career

After leaving the majors, Shinjo signed with the Nippon Ham Fighters, where he had another very good year, batting .298/.327/.508 with 24 HR and 79 RBI in 2004. While he was again not among the league leaders in any category, he had played well enough to make a third Best Nine, his first in the Pacific League. In 2005, Shinjo fought a hand injury, and played in only 108 games, posting a line of .239/.274/.455 with 20 HR, more in line with his typical NPB season. While Michihiro Ogasawara and Fernando Seguignol were the star players of the Fighters, it was said that Shinjo was the face of the team. In early 2006, Tsuyoshi announced he would retire at the end of the season and said he was interested in becoming a nude model (he did in fact become a successful underwear model, along the lines of Jim Palmer). He hit .258/.298/.416 with 16 homers as his power again failed to compensate for his lack of OBP skills. Nippon Ham made their first Nippon Series in 25 years, though, thanks to the club's other performers, and when the Fighters won the series in five games over the Chunichi Dragons, he was carried off the field in triumph by his teammates.

Shinjo was known for his corny and selfish attitude, when once asked by manager Katsuya Nomura on why he didn't steal bases despite having excellent speed, he responded by saying "because I have no interest in it"; Nomura later responded by calling Shinjo "a spaceman". Tsuyoshi also said he didn't want to develop bigger leg muscles because they wouldn't look good in jeans. Known for style over substance, he also wore fancy leather suits, eyebrow makeup, orange wraparound sun glasses and used lots of hairspray. It must have worked as he married one of Japan's top models. Also, in 2006, Shinjo showed up to practice at Koshien Stadium with one of his old Hanshin uniforms on May 18th and was warned by Pacific League umpire Yoshio Maekawa. He was also warned by Maekawa for wearing collared undershirts. Shinjo was clearly one of the most popular and controversial players wherever he has appeared and regardless of the fact that he rarely was his team's star.

Sources include The Meaning of Ichiro by Robert Whiting