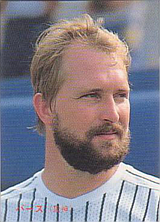 Randy Bass was a great power hitter everywhere he played - except Major League Baseball. He played parts of six seasons in the bigs, ten in the minors and six in Japan.

Fractures of both feet at age 8 limited Randy to being a lumbering slugger, known for his homers and ability to draw walks and hit for average. His professional career began when, as a high school graduate, he was selected by the Minnesota Twins in the 7th round of the 1972 amateur draft. He was a standout from the beginning - in the rookie ball Florida East Coast League he hit .307, slugged 10 homers (two times as many as the next best player) and drove in 41, leading the league. He picked up two of the three legs of the Triple Crown and was competitive in the bid for the batting championship as well, finishing six points behind leader Dave Edwards. He also led the league in OBP (around .640), slugging (.533), doubles (15), walks (59), runs (47) and total bases (106). Bass continued his ascent and dominance in the 1973 Midwest League. That year, he homered 21 times for the Wisconsin Rapids Twins, edging Chet Lemon for the league lead. Only Lemon (88 RBI) drove in more than Bass's 86. He also drew 95 walks and made the All-Star team at first base.

In 1974, Randy was knocking the long ball for the Lynchburg Twins of the Carolina League - he homered 30 times and drove in 112. Bass led the league in RBI by 14 and homered 9 more times than anybody else. He was third in the league with 96 walks and made the loop's All-Star team at first base. His batting line was .256/~.390/.492. In his first three years as a pro, he had led the league in home runs every single season. At age 21, Bass made his Triple A debut, skipping Double A. Bass not only did not lead the league in homers, he did not even lead his team; his 18 were 8th in the Pacific Coast League and he finished sixth with 80 RBI. Bass returned to Tacoma the next year and hit 3 more homers while raising his average 22 points to .279/~.421/.466. He was still "only" 6th in the PCL in bombs and he finished second in walks. In 1977, at 23, Bass lit it up for the Tacoma Twins in his third year at the level. He raised his average another 42 points to .321, homered 25 times (up to 5th in the league) and drove in 117 (second).

He got brief looks in the major leagues with the 1977 Twins and the 1978 Royals, but did not stick, playing a total of 11 games between the two. For the Omaha Royals in '78, Bass hit .279/~.419/.496. He tied for 7th in the American Association with 22 home runs and led the league with 100 walks. The Montreal Expos purchased his contract from the Royals at the end of spring training in 1979, and sent him to play first base for the Triple A Denver Bears. He had a phenomenal season in the American Association, collecting 140 hits in 122 games, with 97 walks (third in the league), 28 doubles, a triple and 36 home runs (2nd in the league) for a batting average of .333 (third in the league), an OBP around .461 and a slugging percentage of .660 (possibly leading in OBP and slugging). That display earned him a third call up to the majors, but with the Expos locked in a tight pennant race with the Pittsburgh Pirates, for some reason manager Dick Williams decided Bass would not be any help and kept him glued to the bench. In fact, he was only used in two games: on September 16, he played one inning at first base as a 9th inning defensive replacement, then on September 26, he was used as a pinch hitter to make the last out in a 10-1 defeat in Pittsburgh. In other words, a waste of a good hitter.

Bass was back in Denver in 1980 and, moving to designated hitter to open first base for Dave Hostetler, he tore the cover off the ball once again. He hit .333 with a slugging percentage of .644 and OBP around .440, thanks to 24 doubles, 2 triples and 37 home runs, a league-leading 143 runs batted in and 106 runs scored. He was named MVP of the American Association and won his fourth home run crown. At the end of Denver's season, he was sent to the San Diego Padres to complete an earlier trade that brought relief pitcher John D'Acquisto to Montreal. He got his best chance to show his talent with the Padres, and had a good month of September in 1980, hitting .286 with 3 home runs. In 1981, he started the season in San Diego, sharing first base with Broderick Perkins. Unfortunately, he only hit .210 in 176 at bats and lost manager Frank Howard's confidence. He was released and picked up by the Texas Rangers early in the 1982 season, but only hit .208 in his first 16 games and lost his job once again to Hostetler, who had been acquired from the Expos in the meantime.

While one could argue that Bass did not get a sufficient chance to play in the majors, he said "I don't want to be like those other guys and complain that I never got my chance. I got called up six times . . . I just didn't do it."

In 1985, he hit 54 home runs, one fewer than the all-time single season record held by the great Sadaharu Oh; on the final weekend of the season, playing against Oh's old team, the Tokyo Giants, managed by Oh himself, Bass never got a chance to swing the bat: Giants' pitchers were instructed not to throw any balls close to the plate. After four straight intentional walks one game, Bass lunged at a way outside pitch and knocked it for a single. Oh denied involvement; Giants reliever Keith Comstock said the team's pitching coach had told the team not to throw to Bass. Bass was the first gaijin to ever lead the Central League in homers. He was also the second foreigner to be Central League MVP, 28 years after Wally Yonamine had been the first. In 1986, he hit for .389, which is still a Japanese record. The Japanese sports media kept trying to figure out how to retire Bass so that he would not break Isao Harimoto's NPB record for average. That year, he hit a ball over 520 feet and out of Korakuen Stadium.

Bass was released by Hanshin in June 1988 when he returned to the United States after his son was diagnosed with brain cancer. Although the Tigers had authorized Bass to leave Japan, they later claimed that no such authorization had been given and fired Bass in absentia. Bass promptly produced a tape recording establishing definitively that the Tigers had authorized his leave of absence. In disgrace, the General Manager of the Hanshin Tigers, Shingo Furuya, committed suicide. Though he was still hitting well (.321/.404/.423), Randy Bass never returned to NPB or organized baseball.

Bass was long considered a strong candidate to become the second American player to be named to the Japanese Baseball Hall of Fame; Yonamine was the first and Bass received high vote totals so far but did not win election until 2023. In career average for players with over 2,000 at bats, only Ichiro Suzuki ranks higher in the history of Nippon Pro Baseball. Bass led the Central League in average, total bases, OBP, slugging, homers and RBI in both 1985 and 1986 to give him 6 career home run titles as a pro player. He also led in walks and intentional walks in 1986 and slugging in 1983 and 1984. He was named to the Best Nine in 1985, 1986 and 1987.

Bass hit 246 long balls in the minors and added 202 more in Japan. With his 9 in the majors, he hit 455 career home runs as a professional despite having his career end abruptly at age 34. Otherwise, he might have had a very realistic chance at 500 home runs.

Senior ball, politics and other activities[edit]

In 1989, Randy Bass played for the Orlando Juice of the Senior Professional Baseball Association. He hit .393 with 5 homers in 29 games with the team. After his career was over, he worked on community projects in his native Oklahoma, served as a cultural Ambassador to Japan, was a commentator for Minichi Broadcasting and scouted for the Yomiuri Giants from 1998-2003. In 2004, he was elected to the Oklahoma State Senate as a Democrat; he served through 2018. His biography states that he is a cattle and wheat farmer.