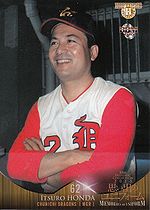 Itsuro Honda began his career as a pitcher but wound up primarily as an outfielder, once leading the Central League in steals.

He later was a minor league manager for the Dragons and coached for them as well. In 1968, he took over managerial reigns mid-season for Shigeru Sugishita and went 29-43-3, better than Sugishita had done. Just an interim appointee, he was not given the full-time job. He survived a stroke in 1983 but died of liver cancer in 2005.