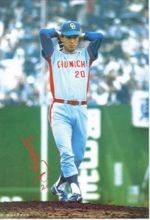 Like many Japanese kids growing up after World War II, Senichi Hoshino lost his father before he was born. He pitched a no-hitter early in his college career but went just 23-24 at Meiji University. Despite that, he still was a first-round draft pick of the Chunichi Dragons in 1968. The move paid off - as a rookie in 1969 Hoshino made the Central League All-Star team and went 8-9 with a 3.11 ERA. The next season he allowed the most runs (90) in the CL and was 10-14, 3.64 in 205 innings of work as a regular member of the Dragons rotation.

In 1971 Hoshino improved to 9-5, 3.46 and then, as a reliever, went 9-8 with a 2.00 ERA in '72. Back as a swingman in 1973 Senichi went 16-11 with a 3.04 ERA and begun establishing himself as a star. His best year arguably was 1974 when he was 15-9 with 10 saves and a 2.87 ERA, leading the league in saves and being honored with the Sawamura Award as the top pitcher in Nippon Pro Baseball. Hoshino was 8th in the Central League in ERA and made his second All-Star team. Chunichi made their first Japan Series in twenty years, but lost to the Lotte Orions.

At age 28, Hoshino had a 17-5 record, 4 saves and a 2.77 ERA, improving in most areas. He improved to fifth in ERA, was part of a three-way tie (with Kazushi Saeki and Yoshiro Sotokoba) for the league lead with 3 shutouts, made another All-Star squad and was only 3 wins behind the lead. He made his third consecutive All-Star team in 1976; moved back to the rotation full-time he was 10-6 with a 3.92 ERA in only 20 games. He again pitched three shutouts, tying three other pitchers for the CL lead.

In 1977 Senichi set a career high in wins (18), but lost 13. His ERA was 3.53 and he registered five saves. He again was one of four pitchers in the Central League with three shutouts and led the loop as well in wild pitches (12). He won two fewer games than league leader Satoshi Takahashi.

After retiring as a player, Hoshino became a baseball commentator for NHK. In 1987 he was named manager of the Dragons and led them to a 68-51-11 record, a 15-game improvement over what they had done a year earlier under Morimichi Takagi and Kazuhiro Yamauchi. The Dragons improved even further in 1988, going 79-46-5, setting a new franchise record for victories. They were no match for the dynastic Seibu Lions, though, and fell 4 games to 1 in the Japan Series.

Senichi was not without a job long. In 2002 he was hired as the new pilot of the Hanshin Tigers, replacing Katsuya Nomura, and the team improved by 9 and a half games, going 66-70-4. It was the most wins registered by a Hanshin club in a decade. The improvement continued in 2003 when Hoshino's Tigers were 87-51-2 and won the CL pennant for the first time in 18 years. Hoshino's team won 3 of the first five games in the Japan Series against the Hawks but lost the final two contests as his team fell in the championship for the third time in three tries as a manager. Hoshino retired after that year due to medical problems (high blood pressure); as a manager he had gone 919-789-33, a .538 winning percentage. One of his coaches, Akinobu Okada, replaced him as manager, and he became a special advisor to the team. He helped stop plans to change Nippon Pro Baseball from a two-league to one-league format at that time.

As of 2005, Hoshino ranked 13th all-time in NPB in managerial victories and only four of the managers ahead of him had a better winning percentage than .538 (amazingly, 5 of the top 13 had that .538 figure).

As a player and manager, Hoshino was known as a very aggressive and competitive individual. He was known for fighting with players from other teams, even during his managerial days, screaming at players, hitting his own players and kicking dirt at umpires and attacking them. Dong-yol Sun recounted that Hoshino used to punch and kick players who made mistakes and once slapped someone so hard they could not eat for several days. He also rewarded those who did well, getting lavish gifts for the wives and mothers of his players, chasing away gangsters trying to befriend his players and straightening out troubled young men on his teams.

With his successful, aggressive style, Hoshino marked a stark contrast to the laid-back (by NPB standards), successful managers of the era such as Hiromitsu Ochiai, Bobby Valentine and Akira Ohgi and the other old-style managers who were floundering in that period such as Nomura and Tatsuro Hirooka).

Hoshino was appointed to lead the Japanese team in the 2007 Asian Championship (which they won) and the 2008 Olympics. In Beijing, Japan finished 4th, earning Hoshino much criticism from the Japanese media and fans for his team selection and player usage.

After a 8-year absence, he returned to NPB as manager of the Rakuten Golden Eagles, who had success in 2009 under another traditionalist (Katsuya Nomura) before slipping in 2010 with Marty Brown. He went 66-71-3 in 2011 and 67-67-10 in 2012. In 2013, they won the PL title at 79-55-3 then prevailed over Yomiuri in the 2013 Japan Series for their first title. It was his first Japan Series title in four tries as a skipper. He broke Shigeo Nagashima's record as the oldest winning manager in a Japan Series. He was the unanimous winner of the Matsutaro Shoriki Award, which he had split with Sadaharu Oh 10 years prior. The team fell to last at 64-80 in 2014 and he was replaced as manager by Hiromoto Okubo.

He was inducted into the Japanese Baseball Hall of Fame in 2017. Hoshino died in early 2018 following a battle with pancreatic cancer.

Main source: japanbaseballdaily.com by Gary Garland. Secondary source: The Meaning of Ichiro by Robert Whiting, Donga.com article on the relationship between Dong-yol Sun and Hoshino