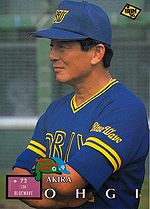 Akira Ohgi went onto be one of the most successful and influential managers ever to manage in Japan, being instrumental in the success of Japanese greats Ichiro Suzuki and Hideo Nomo.

After losing his father during 1944 in World War II, Ohgi and his mother were left on their own. He went on to become a high school baseball star, taking his team to the Koshien Tournament in 1953.

Ohgi started his career with the Nishitetsu Lions in 1954; manager Osamu Mihara converted him from being a pitcher to a second baseman. He batted .229/.293/.342 over his 14-year career. Rarely posting OBPs over .300, Ohgi displayed some power and speed early on, hitting 15 homers in 1955 and twice topping 20 steals. He was known much more for his great glovework than his offensive skills. Ohgi was selected to one Pacific League Best Nine squad in 1960. His clubs made five Japan Series and won three of them.

Following Ohgi's retirement, he joined the Lions as a coach from 1968 to 1969. Ohgi then went on to coach with the Kintetsu Buffaloes from 1970 to 1987. Akira became Kintestu's manager in 1988; he led the Buffaloes to a PL pennant in 1989. The turnaround was very impressive as Kintetsu had been 52-69-9 in the year before he started on the job. He was extremly instrumental in the development of pitcher Hideo Nomo into a dominant pitcher, by letting Nomo do his own thing in workout regiments. Following his retirement from Kintestu in 1992, Ohgi became a baseball commentator during the 1993 season.

Ohgi was hired to manage the Orix BlueWave in 1994. During the 1994 season, Ohgi was very instrumental in the development of outfielder Ichiro Suzuki, whose previous manager Shozo Doi had said would never hit with his unorthodox batting style. Ohgi placed Ichiro into the leadoff spot, and Ichiro responded with a NPB single-season record 210 hits and threatened to become the first .400 hitter in NPB history, falling just shy of Randy Bass's single-season batting average record when all was said and done. Ohgi led the Orix Blue Wave to two Pacific League pennants in 1995 and 1996. Ohgi led the Blue Wave to a Nippon Series win in 1996, the only such title ever won by the BlueWave. Ohgi went on to to manage Orix until being fired after the 2001 season. After he left the club finished last four seasons in a row. Due to the success of Akira's clubs in both Kintetsu and Orix, the phrase "Ohgi Magic" was used to refer to the sudden turnaround of teams under his leadership. Bobby Valentine remarked in the mid-1990s that Akira had the most distinct management approach in a country which praised uniformity in tactics. The fact that two of his stars developed because he allowed them to do what worked best for them is evidence that his approach was effective. Additionally, he was known as a very personable manager whose players thought highly of his character.

Ohgi was elected to the Japanese Baseball Hall of Fame in 2004. He then was hired to manage the newly merged Orix Buffaloes in 2005. Despite Orix's fourth place performance, Ohgi helped to engerize the team, by finishing 62-70-4. It broke the 4-year run of last-place finishes for Orix clubs since Ohgi had been fired. Following the end of the season, Ohgi stepped down as manager due to his weakening health. Ohgi died soon afterwards on December 15, 2005 because of respiratory arrest. Ohgi finished with a 988-815-53 managerial record.