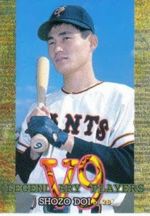 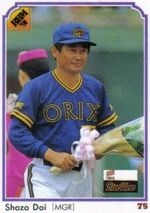 Note: This page links to Shozo Doi, the Yomiuri Giants infielder and Orix BlueWave manager. For an infielder from 1939-40 with the same name, click here.

Shozo Doi was a two-time Best Nine second baseman who was a member of the famous V-9 Yomiuri Giants who won nine consecutive Japan Series from 1965-1973. Doi later would serve as manager of the Orix BlueWave, where he became infamous for his refusal to play a youngster named Ichiro Suzuki, convinced that Suzuki would not succeed.

Doi became a coach with Yomiuri after retirement. He was hired to manage the Orix BlueWave in 1991 and they finished third at 64-63-3; it was a 5 1/2 game decline from what the Orix Braves had done a year earlier. Shozo ran into conflict with Boomer Wells, as Doi did not feel a foreigner should be seen as the club leader, bumping Wells down in the batting order.

In 1992, Orix remained third with a 61-64-5 record. Ichiro Suzuki, who had led ni-gun in hitting, did okay in limited duty, but Doi returned him to the farm early in 1993, saying that Ichiro had "come too fast too far...a player has to know hardship if he's going to reach his full potential." Doi cited former teammate Sadaharu Oh as an example of this. Doi also criticized Suzuki's batting stance and said he would never succeed.

Ichiro was called back to Orix during the 1993 season but struggled to perform while incorporating Doi's suggested batting stance changes. Suzuki requested a return to the minors to return to his old batting form. Doi agreed to send him back down. Orix finished 70-56-4 for another third-place spot, giving Doi a 195-183-12 managerial record. Doi was forced to resign by administration and Akira Ohgi was brought aboard - under Ohgi, Suzuki became a star and Orix won two Pacific League pennants in the next three years. Doi would return to Yomiuri as a coach.

Doi had surgery for pancreatic cancer in 2007 and died two years later.