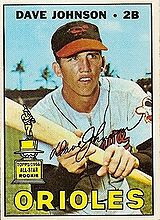 Second baseman Johnson was a four-time All-Star and won three Gold Gloves during a 13-year career in the majors.

After making his major-league debut in 1965, Johnson became a starter for the Baltimore Orioles team that won the World Series in 1966. He also started for the club that won three straight American League pennants from 1969 to 1971 and a second World Series title in 1970. After the 1972 season, he was traded to the Atlanta Braves in a six-player deal.

In 1973, playing for the Braves, he hit 43 home runs and set a new Major League Baseball record for homers by a second baseman, a mark previously held by Rogers Hornsby for 50 years. Two of his teammates, Hank Aaron and Darrell Evans, also hit more than 40 homers that year, the first time three teammates had ever topped the 40-mark in the same season.

While Johnson is remembered (as a player) primarily for his 43 home runs in 1973, he was also good in other years, as his four All-Star appearances show. In 1966 he was third in the Rookie of the Year voting, and in 1967 and 1969 he was in the top four in the league in doubles. In 1971 he placed 19th in the MVP voting due to Gold Glove fielding along with a solid year with the bat, helping the Orioles to a year in which they won 101 games. For that period, he was teamed with Brooks Robinson at third base and either Luis Aparicio or Mark Belanger at shortstop - tremendous fielders all - giving the Orioles one of the best-fielding infield in baseball history.

After being let go by the Atlanta Braves in April of 1975, he played for the Tokyo Giants in Japan in 1975 and 1976. Johnson was the first foreign player for the Giants after they won a record nine straight Japan Series titles without any gaijin assistance. Manager Shigeo Nagashima personally selected Johnson to become the team's first foreigner in over a decade and Johnson was to replace Hall-of-Famer Nagashima at third base. After predicting a 50-home-run season, Johnson hit just 13 homers. In June, he set a Central League record by striking out in eight consecutive at-bats. Worse, his overall line was .197/.275/.356, a far cry from what Nagashima had been hitting. Davey became known as "Dame (No Good)" Johnson, was ridiculed by the press and fans. Additionally he lost almost 15% of his body weight and broke a bone in his shoulder to lose a month of playing time. For the first time ever, Yomiuri finished last and Johnson certainly deserved and received some of the blame.

In January of 1976, Davey became one of the few Americans to participate in the "voluntary" training camps attended by practically all the Japanese players. He returned to play second base but injured his left thumb while sliding into a base and demanded to go to the USA to see a specialist; Nagashima refused and Johnson went against the most popular man in Japanese baseball (who had also gotten him his job). When Johnson went ahead to see Dr. Robert Kerlan in Los Angeles, CA the press began calling for a reinstitution of the Giants' ban on gaijin. Kerlan said Johnson had an inflamed neroma and Davey sat out a couple of weeks waiting to get a return visa to Japan, then (as per medical advice) neglected batting practice upon returning to action. He hit a game-winning grand slam in his first day back and homered 9 times in 12 games. He hit 18 homers in August and September - overall he hit .275/.365/.539 with 26 homers and hit the pennant-clinching homer. He won a Gold Glove and was named to the Best Nine. Johnson had done a goat-to-hero turn and Yomiuri went worst-to-first.

Despite promises from Nagashima that he was not required to take batting practice due to his injury, the Yomiuri coaches forced him to do so during the Japan Series. Johnson was 0 for 13 with 6 K's in the post-season. Yomiuri GM Roy Saeki offered Johnson an $80,000 contract, a 20% pay cut. Johnson said he'd sign if Nagashima apologized for going back on his word. The manager/national hero refused and the Giants did not renew the contract, claiming Davey had made unrealistic demands. Giants star Tsuneo Horiuchi said "We don't need any greedy gaijin" and fellow Yomiuri leader Sadaharu Oh criticized Johnson's character.

The Kintetsu Buffaloes expressed interest in signing Johnson but the Giants barred the way, using their influence as the most popular and powerful team in Japan. Johnson, who had wanted to return to play and coach in Japan, returned to the US and had his best rate-stat season ever, posting a 150 OPS+ in part-time work for the Philadelphia Phillies in 1977 before fading away at age 35 in 1978. 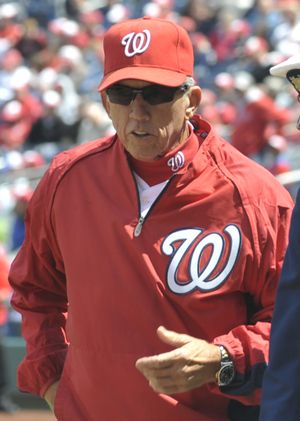 Johnson made his managerial debut in 1979 with the Miami Amigos, leading that team to the best record in the short-lived Inter-American League. In 1981 he was skipper of the Jackson Mets of the Texas League and in 1983 he led the Tidewater Tides. In 1984, Johnson became manager of the New York Mets and their record improved by 22 games in his first season with the team, as they went from last place to second. Two years later, in 1986, he led the team to their best record ever and a World Series title.

In 1993, Johnson replaced Tony Perez as skipper of the Cincinnati Reds, and in 1996, he moved on to the Baltimore Orioles. However, he was fired by O's owner Peter Angelos in 1997 after winning the AL Manager of the Year Award and leading the Orioles to 98 wins and the playoffs. He spent 1999 and 2000 as manager of the Los Angeles Dodgers.

In 2011, he got back into managing at the major league level when the Washington Nationals pegged him to replace Jim Riggleman, who had resigned abruptly on June 23rd. Johnson was a special adviser to GM Mike Rizzo at the time. It took a few days to work out the terms of a deal to return Johnson to a major league dugout for the first time in 10 years, with John McLaren assuming interim duties in the meantime. He managed his first game with Washington on June 27th. The team struggled during the remainder of the year, but he was putting in the building blocks for an outstanding season in 2012 by evaluating his young players, and resting others, like P Jordan Zimmermann, who was coming off Tommy John surgery. Everything clicked in his second season, as outstanding starting pitching led by Stephen Strasburg, Gio Gonzalez and Zimmermann meant that the team was never blown out of games, while its young hitters took big steps forward, in spite of injuries early during the season to veterans like Jayson Werth and Mike Morse. One of the key youngsters to step up was OF Bryce Harper, whom Johnson integrated into the starting line-up effectively without burdening the phenom with too much pressure. As a result, the Nationals had the best record in the major leagues by late August, when controversy arose over what to do with Strasburg, who was one of baseball's best pitchers but one year removed from Tommy John surgery. Following the path used successfully with Zimmermann a year earlier, GM Rizzo insisted that he would be shut down when he reached a certain number of innings, but with the possibility of a postseason berth ever more likely, Johnson began to express his uneasiness with an approach taking no account of the team's immediate needs. The two exchanged harsh words after the Nats lost a rare four games in a row in late August, with Johnson accusing Rizzo of trying to insert himself in managerial decisions when he had no idea of what it takes to be a major league skipper. In the end, Rizzo's views prevailed and Strasburg was shut down in early September. The Nationals won the NL East title, but headed into the postseason without their ace. It likely cost them, as they lost a tightly-fought five-game NLDS to the St. Louis Cardinals, with fourth starter Edwin Jackson getting bombed and losing his only start; he would have likely been confined to the bullpen had Strasburg been available. In spite of that bitter ending, it was a remarkably successful season for the Nats, and Johnson was voted the National League Manager of the Year Award for his work. He became the second skipper in MLB history to take four different clubs to first-place finishes, following Billy Martin.

The Nats were expected to compete again in 2013, but had difficulty getting untracked, sputtering around .500 for most of the season until a late-season surge put them 10 games above .500 and at least within shouting distance of the first-place Atlanta Braves. Johnson announced his retirement after the season and was replaced by Matt Williams, another former slugging infielder.

Johnson retired with a managerial winning percentage of .588. In 15 full seasons he led his teams to 6 first-place finishes and 7 second-place finishes. The only three times his clubs did worse was when he was in his first year with a new team. In 2017, he was placed on the Veterans Committee ballot for the Hall of Fame open to players and executives from "Today's Game" era. He received less than 5 votes, but was considered again in 2019.

Sources include japanbaseballdaily.com, "You Gotta Have Wa" by Robert Whiting