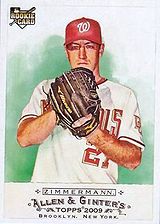 Jordan Zimmermann was drafted by the Washington Nationals in the 2nd round of the 2007 amateur draft. He was signed by scout Steve Arnieri for $495,000 and made his pro debut that summer.

Zimmermann made his major league debut with the Washington Nationals on April 20, 2009, beating the Braves with a solid pitching performance in which he gave up 2 runs on 6 hits and a walk in six innings. He was a teammate of Ryan Zimmerman - no relation - on that team. He made only 16 starts for the Nationals in his debut season, going 3-5, 4.63, but showing some excellent stuff in striking out 92 batters - against only 29 walks - in 91.1 innings.

On May 6, 2011, Zimmermann struck out the side on 9 pitches in the second inning in a start against the Florida Marlins. He was the 42nd pitcher in major league history to accomplish the feat.

In July of 2012, Jordan became the third Nationals' pitcher to win Pitcher of the Month honors in the National League, following teammates Stephen Strasburg and Gio Gonzalez. He went 4-0 with an 0.97 ERA, issuing just for walks during the entire month. His record at the end of July stood at 8-6, 2.28. His strong performance helped the Nationals maintain their hold on 1st place in the NL East heading into the season's home stretch.

On April 26, 2013, he threw his first career shutout, and it was a beauty, a one-hitter against the Cincinnati Reds in which he needed only 91 pitches to win, 1-0. The only blemish that day was a single by Xavier Paul to lead off the 3rd inning. That game followed a combined one-hitter by Gio Gonzalez and Rafael Soriano a day earlier and gave the Nationals a record over .500 for the first time since the season's first week. On May 13th, he became the first major league pitcher to notch seven wins that year, when he defeated the Los Angeles Dodgers, 7-2. He pitched 7 2/3 innings and drove in three runs himself in a typical strong performance. On May 29th, he seemed headed for a major-league leading 9th win, entering the bottom of the 7th against the Baltimore Orioles with a 6-3 lead on the strength of three homers by his almost namesake Ryan Zimmerman. However, he suffered a rare collapse as he and Tyler Clippard gave up six runs that inning, and Jordan fell to 8-3 while the Nats lost, 9-6. He was named to the All-Star team for the first time, but bowed out of the game because of a stiff neck. He ended the season with a record of 19-9, tied for the National League lead in both wins and shutouts (2). He also pitched 213 1/3 innings, a career high, as were his 161 strikeouts.

On June 8, 2014, Zimmermann pitched one of the best games of his career when he shut out the San Diego Padres, 6-0, allowing only 2 hits and striking out a career-high 12 batters; he also did not walk anyone in the contest. He followed that with another great start on June 13th against the St. Louis Cardinals, when he allowed only 3 hits over 8 innings. However, one of these hits was a solo homer by Matt Adams, and his opponent, Lance Lynn, only gave up two hits and no runs before turning the ball over the Trevor Rosenthal in the 9th, and Jordan ended up with a 1-0 loss. On September 28th, however, starting the last game of the season for the NL East champions, he pitched a no-hitter, defeating the Miami Marlins, 1-0. Ironically, his opponent that day was Henderson Alvarez, who had tossed a no-hitter on the final day of the 2013 season. A solo homer by Ian Desmond in the 2nd inning gave Jordan the only run he needed, and LF Steven Souza saved the day by making a tremendous diving catch on a drive by Christian Yelich to end the game. It was the first no-hitter in Nationals history, although there had been four of them when the team was the Montréal Expos. Zimmermann finished the season at 14-5, 2.66, with 182 strikeouts in 199 2/3 innings. He started Game 2 of the NLDS against the San Francisco Giants­ on October 4 and was brilliant for 8 innings, keeping the Giants off the scoreboard. He had a 1-0 lead entering the top of the 9th and retired the first two batters, Matt Duffy and Gregor Blanco. One batter away from a complete game shutout, he walked Joe Panik and manager Matt Williams made a highly controversial move, deciding to lift him in favor of closer Drew Storen. Storen gave up a single to Buster Posey and a game-tying double to Pablo Sandoval and the game was not decided until the 18th inning, when Brandon Belt homered to give San Francisco a 2-1 win. The Nationals never recovered and lost the series in four games.

In 2015, Jordan's numbers went down as the Nationals had a very disappointing season that left them short of a postseason slot. He went 13-10, 3.66 in 33 starts - tied for most in the National League. He pitched 201 2/3 innings and struck out 164 batters while walking 39. His ERA was the highest since his first two seasons in 2009 and 2010, but it was still good for an ERA+ of 110. He became a free agent after the season and on November 29th, the Detroit Tigers gave him a contract fit for an ace, offering $110 million over five seasons.

Jordan had an excellent first start for the Tigers in their home opener on April 8, 2016, facing the New York Yankees before a full house at Comerica Park. He pitched 7 scoreless innings, allowing only 2 hits, as the Tigers shut out the Bronx Bombers, 4-0. He kept it up over his next two outings, which were both also wins, and in which he also held hips opponents scoreless. Thus, after three starts for Detroit, he was 3-0 with a virgin ERA in 19 1/3 innings. He was named the American League's Pitcher of the Month for April after going 5-0, 0.55 in his first month in the circuit. On May 22nd, he improved to 7-2 with a 9-4 win over the Tampa Bay Rays, but he had to leave the game after 5 2/3 inning with a pulled groin muscle. he came back on June 3rd, and started 6 games in June, going 2-2, but with an ERA of 6.43. On July 4th, he was placed on the DL again, this time with a neck strain and only returned a month later. In his first start back on August 4th, however, he allowed 6 runs on 6 hits and 2 walks in 1 2/3 innings and was charged with a 6-3 loss to the Chicago White Sox. While he did not feel any pain, he could not get properly extended and after the game underwent an MRI to see if there was maybe a problem with a lateral muscle on his right side. Indeed, he was placed back on the DL two days later. He finished the year at 9-7, 4.87 in 19 games.

2017 was a year to forget for Zimmermann. While he was healthy, the results were terrible. He made 29 starts but pitched just 160 innings and ended up with a record of 8-13, 6.08. He led the AL with 108 earned runs allowed and also gave up 204 hits. In 2018, he had to leave his third start on April 11th after just 7 pitches when he was hit in the side of the face by a line drive off the bat of Jason Kipnis of the Cleveland Indians. He said he escaped a broken jaw because he had suffered a similar hit in 2007 when he was still in college and doctors had inserted a couple of protective plates in his mouth, making his jaw virtually unbreakable. He had to leave the game and suffered swelling, but was not expected to miss a start. Overall, things were a bit better than the previous season as he made 25 starts, going 7-8, 4.52 for a team that was well below .500. His best numbers were his K/W ratio, at 111/26. He was picked to start on opening day in 2019, in part because of a lack of other options, but he flashed some of his old form facing the Toronto Blue Jays on March 28th: he was perfect through the first 6 2/3 innings before allowing an infield single up the middle by Teoscar Hernandez. He completed the inning by striking out Justin Smoak, then left the game with the score still 0-0. Detroit eventually won on a two-run homer by Christin Stewart in the 10th inning. However, it was not a sign of things to come: he had a wretched season, as shown by his record of 1-13, with an ERA of 6.91 in 23 starts.

He only made a handful of appearances between 2020 and 2021, the first year with the Tigers and the second with the Milwaukee Brewers. They only served to confirm that there was nothing left in the tank: his ERA was 7.94 both years. Shortly after a relief appearance with the Brewers on May 7, 2021, he announced his retirement.

He is not to be confused with Jordan Zimmerman, a pitcher from the 1990s, who spelled his last name with only one n.