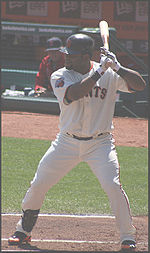 Pablo Sandoval is a professional baseball player who began his major league career with the San Francisco Giants.

Sandoval was signed by scout Ciro Villalobos as an undrafted free agent in May 2003. He began his professional career in 2004 as a catcher with the AZL Giants, hitting .266 with no home runs and 26 RBI in 177 at-bats. In 2005 with the Salem-Keizer Volcanoes, he moved to third base, hitting .330 with three home runs and 50 RBI. The following year, as a 19-year-old in the South Atlantic League, his batting average slumped to .265. Playing for the Augusta GreenJackets that year, Sandoval had one home run and 49 RBI while splitting time defensively between first and third base. Still, in 2007, Sandoval rose to play high-A ball for the San Jose Giants of the California League. At San Jose, Sandoval hit .287 with 11 homers and 52 RBI as a 20-year-old, while his defensive movements continued, as he returned to catching and first base.

In 2008, Sanchez made his great leap forward. Beginning the year by hitting .359 with 12 home runs and 59 RBI at San Jose, Sanchez was moved up to the AA Connecticut Defenders. At the age of 21 at AA, Sanchez found still more success, hitting .337 with eight homers and 37 RBI. On August 13th, with combined totals of .350 with 20 home runs and 96 RBI, Pablo Sanchez was called up to San Francisco and made his major league debut the next day. Although he went hitless in three at-bats in his debut game against the Houston Astros, he then started a torrid streak that saw him collect 8 hits in his next 13 at-bats, to give him an even .500 batting average in his first week of major league action.

In 2012, Pablo started the season with at least one hit in the Giants' first 20 games, breaking the franchise record set by Hall of Famer Willie Mays. He was the hero of Game 1 of the 2012 World Series against the Detroit Tigers on October 24th; he hit a solo homer off Justin Verlander in the 1st inning, then followed that with a two-run blast off Verlander in the 3rd. In the 5th, he took Al Alburquerque deep, then added a single off Jose Valverde in the 7th. The three homers tied a record set previously by Babe Ruth (twice, in 1926 and 1928), Reggie Jackson (in 1977) and Albert Pujols (in 2011), while his 13 total bases were one shy of Pujols' all-time record. He was only the second batter to have a three-homer game at AT&T Park, the first one having come on April 11, 2000, courtesy of the Los Angeles Dodgers' Kevin Elster in the first game ever played in the ballpark. Thanks to Pablo's bat, the Giants won the game handily, 8-3, on their way to sweeping the Series in four games. Sandoval was named the Series MVP, having hit .500 over the four games in addition to his three homers.

Sandoval had a repeat performance of his World Series heroics in the 2012/2013 Venezuelan League finals. Playing for Navegantes del Magallanes, he was named MVP of his team's defeat of Cardenales de Lara in seven games, hitting .300 with 3 homers and 9 RBI; in the decisive 7th game, he hit a pair of doubles and a key two-run homer to lead the Navegantes to the 2013 Caribbean Series. After receiving that MVP honor, he stated that his goal was to achieve a unique Triple Crown: winning the World Series, the Venezuelan League championship and the World Baseball Classic in succession, having just been named to the Venezuelan national team for the 2013 tournament. However, Venezuela had a very disappointing tournament, though Pablo did well (4 for 13, 2 2B, HR, BB, R, 4 RBI), leading the team in RBI and finishing second to Martin Prado in OPS. The home run came off Spain's Eric González and a two-run double off Kelvin Herrera of the Dominican Republic.

The 2013 season was a difficult one both for the Giants and for Sandoval. The team played very poorly after a decent start, quickly falling out of contention while their historic rivals, the Los Angeles Dodgers, were surging and Sandoval's bat seemed to have gone to sleep. He had only 10 homers on the year when he broke out for a rare power outburst on September 4th, with a three-homer game against the San Diego Padres at PETCO Park, leading the Giants to a 13-5 win. It was the first time he had hit three homers in a regular season game. He hit .278/.341/.417 in 141 games, but was often taken out of games in the late innings in favor a defensive substitute - usually Joaquin Arias -, his physical condition having deteriorated quite a bit as a result of a failure to control his weight. He took the criticisms to heart the following off-season and showed up in spring training in 2014 noticeably trimmer, having shed some 30 pounds. He hit .279 in a career-high 157 games that season, the lower weight helping him to stay healthy. He hit 26 doubles and 16 homers, scoring 68 runs and driving in 73 as the Giants returned to the postseason. He was again excellent during those money games, getting a couple of hits and scoring a couple of runs in the Wild Card Game against the Pittsburgh Pirates and going 8 for 20 with 3 doubles in eliminating the St. Louis Cardinals in the NLCS. In fact he extended his remarkable streak of reaching base in every postseason game to 25 before going 0-for-4 in a 3-2 loss to the Kansas City Royals in Game 3 of the World Series.

On November 25, 2014, he signed a five-year contract with the Boston Red Sox. Great things were expected of him, but his first season in Boston in 2015 was a disappointment. He hit only .245 in 126 games, with 10 homers and 47 RBIs and an OPS+ of only 76. Things did not improve in spring training in 2016, as he showed up out of shape then lost his starting job at third base to converted first baseman Travis Shaw. He started the year playing sparingly, as he was 0 for 6 in 3 games over the first week before being placed on the disabled list. Officially it was because of a left shoulder injury, although journalists speculated that it was simply a way for the Red Sox to move some dead weight off the active roster while contemplating what to do with Pablo and his untradeable contract. But there was something actually wring with Pablo's shoulder, as on May 2nd, it was announced that he would have exploratory surgery, performed by Dr. James Andrews, to determine the cause of the problem. He was not expected to return before the following season. The Red Sox went on to have a very good year without Pablo, putting his future with the team even more in doubt. However, for his part, Sandoval did get serious about addressing some of his physical issue, as video evidence began circulating towards the end of December that he was training seriously and had lost a significant amount of weight, putting him down somewhere around a trim 200 lb. He was a re-born player in spring training in 2017, hitting .349 after three weeks and flashing some solid defense at third base as well. Things weren't so hot when the regular season started, as he was hitting only .212 with 4 homers and 12 RBIs in 32 games. He had missed all but one game in May because of a knee injury, and the Sox put him back on the disabled list with an inner ear infection on June 20th. After his return from the knee injury, he had lost playing time to utility infielder Josh Rutledge, and there were questions about whether the Red Sox should simply buy out his contract. The Red Sox decided to move on just as the second half was about to begin, on July 14th, by having Pablo designated for assignment­­. He was still owed $48.3 million on his contract at the time, making it the second most expensive buy-out in major league history, after that of Josh Hamilton's contract by the Los Angeles Angels of Anaheim.

Unsurprisingly, no team was willing to take Sandoval's huge contract off the Red Sox's hands, so they had to release him. Shortly thereafter, on July 19th, news emerged that the Giants were willing to give him a minor league contract as soon as he cleared waivers, in the hope that returning to the site of his past success would allow his talent to re-emerge. He did sign with his original team as expected, and on August 5th, he was called up to the big league team when 1B Brandon Belt was placed on the concussion list following a hit-by-pitch. He had batted .211 in 12 minor league games, but in his first game back with the Giants, he hit a double in the 7th to start a comeback from a 4-0 deficit against the Arizona Diamondbacks as San Francisco came out on top, 5-4, in 10 innings. The hopes that the Pablo of old was back were quickly dashed, however, as he went through a brutal 0-for-39 slump in late August and early September. It was the longest hitless streak by a Giants player since at least 1900, but he snapped it with a three-run homer off Lucas Giolito of the Chicago White Sox in a 9-2 win on September 8th. In all, he played 47 games for San Francisco, hitting .225, to end the year at .220 with 9 homers and 32 RBIs in 79 games.

Pablo was back with San Francisco in 2018 and while no longer a star, he was at least a useful player, filling in mainly at first base and third base and even making his first major league pitching appearance in a blow-out loss. In 92 games, he hit .248 with 9 homers and 40 RBIs, good for an OPS+ of 97. His season ended early, however, as he suffered a torn hamstring sliding into home plate on July 29th. He was back in a similar role in 2019 and on May 6th, he accomplished something extremely rare in a blowout loss to the Cincinnati Reds: he hit a home run, stole a base and pitched in the same game. No player had done this since Mudcat Grant back in 1964, and there were 12 known cases since 1908. All of the others involved players who had been the starting pitcher; in Pablo's case, he had simply come to pitch mop-up relief in the 8th in a 12-4 loss after starting the game at third base. He played 107 games that season, hitting .269 with 14 homers and 41 RBIs. His OPS+ was 114, and those were the most games played for him since 2015 - in spite of missing the final six weeks of the season, as his year ended early because he had to undergo Tommy John surgery on his elbow in early September, after going on the injured list on August 11th. But in a surprise twist, the Giants activated him on September 1st just to allow him to have a final at-bat in front of fans and for manager Bruce Bochy, who was retiring at the end of the season; facing the San Diego Padres, he grounded out as a pinch-hitter but still received a standing ovation from the 39,000 fans present at Oracle Park. His surgery was scheduled for September 4th.

Sandoval's brother, Michael Sandoval, played in the Minnesota Twins chain from 1998 to 2004 and in 2009 played for the Newark Bears.