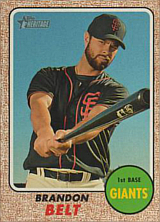 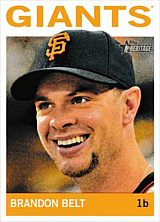 Belt was selected three times in the amateur draft, once as a high schooler in the 11th round of the 2006 amateur draft by the Boston Red Sox, then out of the University of Texas in the 11th round of the 2007 amateur draft by the Atlanta Braves, and finally by the San Francisco Giants in the 5th round of the 2009 draft. He was signed by scout Todd Thomas and made his pro debut in 2010, tearing through the minor leagues in his first season. He started with Class A San Jose Giants of the California League, scorching the circuit to the tune of a .383/.492/.628 batting line in 77 games. He was promoted to the Double A Richmond Flying Squirrels of the Eastern League and barely cooled down; in 46 games, his batting line was .337/.413/.623. That earned him another promotion, to the Triple A Fresno Grizzlies of the Pacific Coast League, where he hit a more pedestrian .229 in 13 games, but with good power and on-base numbers. Overall, he hit .352/.455/.620 in 136 games, with 43 doubles, 10 triples and 23 homers, scored 99 runs and drove in 112, stole 22 bases and drew 93 walks. Baseball America ranked him 23rd in its list of the top 100 prospects entering the 2011 season.

Brandon was invited to the major league spring training by the Giants in 2011 and wowed everyone with his advanced hitting skills. When outfielder and World Series hero Cody Ross went down with a pulled muscle late in camp, the Giants decided to keep Belt on the roster and installed him as the starting first baseman, moving Aubrey Huff to the outfield. He made his debut on Opening Day, March 31st, as the starting first baseman and number 7 hitter against the Los Angeles Dodgers. He hit an infield single off Clayton Kershaw in his first career at-bat and finished the day 1 for 3 with a walk, showing excellent patience in all four of his plate appearances. He hit his first major league home run the next day, a three-run shot off Chad Billingsley. He soon cooled down, and when Ross was ready to come back to action on April 20th, Brandon was sent back to AAA, holding a .192 batting average in 17 games. He was told to work on the timing of his swing, as we was hitting too many foul balls on hittable pitches. He got back to his good hitting at Fresno, putting up a line of .337/.470/.525 in 31 games to earn a call back to San Francisco in late May. In his second game back, on May 31st, he suffered a broken wrist when hit by a pitch by Trever Miller of the St. Louis Cardinals and was placed on the injured list. He returned to the lineup on July 19th, hitting a home run and collecting 3 RBI in a 5-3 win over Los Angeles. He stayed mostly on the bench during this second stint with the team, getting only 21 at-bats, as manager Bruce Bochy elected to go with veterans with the team in a tight race with the Arizona Diamondbacks. On August 4th, he was sent back to AAA in order to play regularly when the Giants activated utility player Mark DeRosa from the 60-day disabled list.

Brandon played a role on the next two Giant World Series champions, manning first base regularly beginning with the 2012 championship season. On October 4, 2014, he hit a homer off Tanner Roark of the Washington Nationals in the 18th inning of Game 2 of the NLDS; it proved to be the margin of victory in the longest postseason game in history as San Francisco won, 2-1, in 6 hours and 23 minutes. On April 9, 2016, he signed a five-year contract extension with the Giants worth $72.8 million, and rewarded San Francisco's faith with his first All-Star appearance, batting .275/.394/.474 with 17 homers, 82 RBI and a personal best 77 runs scored. He was on pace for a new career best in home runs in 2017 when he suffered a season-ending concussion in August. On April 22, 2018, he had a record 21-pitch at-bat against Jaime Barria in the 1st inning of a game against the Los Angeles Angels. He eventually flied out to right field to end the epic battle that lasted 12 minutes and included 16 consecutive foul balls. The previous record was 20 pitches, in an at-bat by Ricky Gutierrez against Bartolo Colon, in 1998. On May 16th, he accused umpire Doug Eddings of deliberately calling strikes in order to shorten games; this came after he had taken a called third strike to end a 6-3 Giants loss to the Cincinnati Reds. "It's tough because you hope an umpire doesn't affect the game like that, but he did, and you’re not sure if it was on purpose either. I've heard the guy multiple times say that, or insinuate, that he’s trying to get to the game fast, and then he makes calls like that, that I can't imagine he really thought was a strike," he told reporters after the game. He received a phone call from Major League Baseball's Chief Baseball Officer, Joe Torre, shortly thereafter, asking him to adjust his attitude. On June 1st, he underwent an emergency appendectomy, putting him on the disabled list. He was removed in the middle of that evening's game, complaining that he was not feeling well. He was having a great season, hitting .307 with 11 homers and 31 RBI in 53 games, cooling off to finish .253/.342/.414 with 14 long balls and 46 RBI. He was unable to thaw in 2019, batting .234/.339/.403 with 17 homers in 156 games.

Belt had a bounce-back season during the pandemic-shortened 2020 season, playing in 51 of the Giants' 60 games and hitting .309 with 9 homers and 30 RBIs. His OPS+ was a career-best 177 and the Giants barely missed the postseason, although few people noticed the improvement because of the buzz generated by the rivalry between the young upstart San Diego Padres and the billionaire Los Angeles Dodgers on top of the NL West. It was therefore a huge surprise when the Giants got off to an excellent start in 2021 and took an early lead in the division, that transformed into an epic race with the Dodgers for a division title with both teams winning over 100 games. Belt continued on his comeback launched the year before as he set a career best for homers while sharing first base duties with C Buster Posey, who was getting a lot of playing time outside of his regular position in order to spare his aging body, and also missed a couple of months due to a knee injury. However, just as the season was winding down and with the division race still undecided, he broke his left thumb on September 27th when hit by a 93 mph fastball by Lucas Gilbreath of the Colorado Rockies. At the time, he was hitting .274 in 97 games, with 29 homers and 59 RBIs, for an OPS+ of 159. He missed not only the final week of the season, but the entire postseason as well, as the Giants bowed out after a Division Series loss to the Los Angeles Dodgers, whom the Giants had edged out of the division title.

In 2022, he was limited to 78 games due to a knee injury that required surgery. He had easily his worst season, batting .213 with an OPS+ of 92 - both career lows. He hit 8 homers and drove in just 23 runs. At 34, the Giants decided that he was unlikely to bounce back, but on January 9, 2023 the Toronto Blue Jays decided to give him a chance after he passed a physical exam, signing him for one year at $9.3 million. He was expected to share first base and DH duties with Vladimir Guerrero Jr.