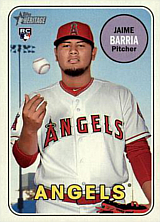 Pitcher Jamie Barria played for the World Team at the 2017 Futures Game. He was signed by the Los Angeles Angels of Anaheim out of his native Panama before the 2013 season when he was just 16 years old.

Barria made his major league debut as the starting pitcher for the Angels against the Texas Rangers on April 11, 2018. It was a solid game as he gave up just 1 run on 1 hit in 5 innings and was given credit for the 7-2 win. After returning to the minors for a brief spell, he came back to face the San Francisco Giants on April 22. In the first inning of that game, he had an epic confrontation with Brandon Belt, needing a record 21 pitches before getting him to fly out to right field; the sequence lasted 12 minutes and included four unsuccessful pick-off attempts and 16 consecutive foul balls before ending. It was one pitch more than the previous record, dating back to 1998 and featuring Ricky Gutierrez and Bartolo Colon. Barria needed 49 pitches to get through that 1st inning and as a result, he was knocked out of the game in the 3rd. He went on to have a fine rookie season, making 26 starts for the Angels and finishing at 10-9, 3.41, with 98 strikeouts in 129 1/3 innings.