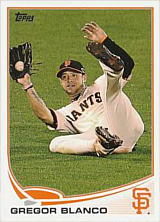 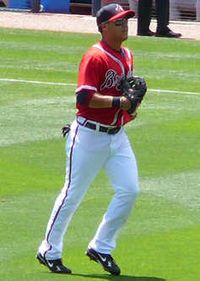 Outfielder Gregor Blanco was the first player to make his debut in 2008 when he pinch ran for Brayan Pena in the 8th inning on Opening Day with the Atlanta Braves. He is perhaps best known for his perfect game-saving grab during Matt Cain's perfecto with the San Francisco Giants in 2012.

In 2005, the Venezuelan outfielder batted .252/.367/.384 for the Mississippi Braves. He had 12 triples, 73 walks and stole 28 bases in 40 tries. He had the first hit, first triple and first run in Mississippi team history on April 7th. He led the Southern League and Braves farmhands in three-baggers that season and also led Braves minor leaguers in walks. He hit .313 for the Tiburones de La Guaira in the Venezuelan Winter League. Blanco produced at a .287/.397/.375 clip in 66 games for Mississippi in 2006 before being promoted to the Richmond Braves. He hit .294/.408/.346 in 73 contests at AAA. Overall, he had 88 runs scored, 151 hits and 31 steals in 46 tries. He led Braves farmhands in hits and runs scored. In winter ball, he batted .313 for the Tiburones. In the 2007 Caribbean Series, Blanco played for the Tigres de Aragua. He made the final catch in a 18-inning loss that was the longest game in Caribbean Series history. Blanco continued to get on base well for Richmond in 2007 with a .282/.369/.362 batting line. He scored 81 runs and stole 23 bases, but was thrown out running 18 times. He led the International League in runs scored and times caught stealing and led Richmond in walks (63), hits (131), runs scored and triples. He hit .345 for the Tiburones that winter to finish second in the league behind Jose Castillo. He was second to Omar Infante with 50 runs scored and tied for 4th with 6 steals.

Blanco spent the entire 2008 season with the Braves after his debut on Opening Day. He played 144 games split between left and center field and put up a batting line of .251/.366/.309. The most impressive part of his game was his ability to draw 74 walks despite a low batting average and lack of power. He scored 52 runs and stole 13 bases while playing solid defense in the outfield. He was added to the Venezuelan national team's roster for the 2009 World Baseball Classic, where he split center field duties with Endy Chavez. Back with the Braves in 2009, he hardly got to play, going 8 for 43 (.186) in 24 games. Instead, he played 90 games for the AAA Gwinnett Braves, hitting .228 with only 2 homers. After that poor performance, he was back with Gwinnett in 2010, where he hit .286 in 44 games. He returned to Atlanta for 36 games and hit .310. On July 31st, he was traded to the Kansas City Royals, with Jesse Chavez and Tim Collins, in return for veterans Rick Ankiel and Kyle Farnsworth. He spent the remainder of the year in Kansas City, hitting .274 in 49 games and playing almost regularly in center field. While it looked like Blanco had found a home with the Royals, he failed to make the team out of spring training in 2011 and was sent to the Omaha Storm Chasers, where he did not help his cause with a .196 average in 23 games. On May 8th, the Royals sent him to the Washington Nationals and he spent the remainder of the year as a bench player with the Syracuse Chiefs, where he hit .203 in 51 games, not nearly enough to earn a call-up.

His career was now at a crossroads, with a risk of washing out of organized baseball altogether if he did not quickly find his hitting stroke again. He signed as a free agent with the San Francisco Giants and it turned out to be a perfect fit. He made the team as a backup outfielder in 2012, playing all three outfield positions due to injuries and the struggles of Hunter Pence. When left fielder Melky Cabrera was suspended for violating Major League Baseball's PED policy on August 15th, Blanco took over as the full-time left fielder. He played 141 games, the most since his rookie season, and hit .244 with 14 doubles, 5 triples and 5 homers, scoring 56 runs and stealing 26 bases. His OPS+ was only 95, but with his speed and very good defense, he was a valuable contributor to the Giants' NL West title. On June 13th, he made a fully extended diving grab of a Jordan Schafer fly ball in the 7th inning to keep Matt Cain's perfect game alive, a perfecto he would complete. He went 4 for 14 with a double and a homer in the NLDS when the Giants defeated the Cincinnati Reds in 5 games, then 4 for 22 with a double and triple in the NLCS win over the St. Louis Cardinals. He was a hero in Game 2 of the 2012 World Series against the Detroit Tigers on October 25th, when he made a great defensive play in the 2nd, throwing out Prince Fielder at home, and then laid down a perfect bunt down the third base line for a key hit as the Giants scored the game's first run in the bottom of the 7th. Those two plays were central to San Francisco's 2-0 win. He was again at the center of things in Game 3 two days later: with Hunter Pence on third base, he tripled off Anibal Sanchez in the 2nd inning to drive in the game's first run, then scored the second on Brandon Crawford's two-out single; for good measure, he made a great catch in foul territory in left field to retire Jhonny Peralta as he led off the 9th inning. The Giants also won that game by a 2-0 score and went on to sweep the series.

In 2013, Gregor played 141 games and hit .265 with 3 homers and 41 RBI. The RBI were a career high for him as he split his time almost evenly between center and left field. In 2014, he played a career-high 146 games, hitting .260 with 5 homers and 38 RBI, scoring 51 runs and adding 18 doubles and 6 triples. Once again, his playing time was split between the same two outfield positions as the previous year, and on a team that won without scoring a lot of runs, he was an important contributor. He started slowly in the postseason, with an 0-fer in the Wild Card Game and a 2-for-18 performance in the Division Series against the Washington Nationals, but he had 5 hits in the NLCS and another 4, including a homer, in the World Series as the Giants defeated his former team, the Royals, in 7 games to claim the title. His key contribution came in Game 4, when he scored 3 runs in an 11-4 win at home.

On May 23, 2015, he led off a game against the Colorado Rockies by striking out - but made it all the way to third base when the pitch got away from catcher Nick Hundley, who threw the ball into right field while trying to get Blanco at first base. He played 115 games that year, seeing time at all the outfield spots while hitting a career-high .291 with 59 runs scored, 5 homers and 26 RBI. In 2016, he was again the Giants' main backup at all three spots, hitting .224 in 106 games with a homer and 18 RBI. He went 1 for 8 with a double as the Giants lost to the Chicago Cubs in the NLDS. He became a free agent after the season and signed with the Arizona Diamondbacks in January 2017 but he suffered an oblique injury on March 21st and was released a week later. He signed a new minor league deal days later and saw action in 90 big league games, batting .246 with 3 homers and 13 RBI. He returned to San Francisco as a free agent for 2018 but was designated for assignment in June, hitting just .217 in 68 games. Blanco spent the 2019 season in Triple A in the New York Mets organization. He retired in February 2020 to take a job in the MLB's baseball operations department. He finished his playing career with nearly 2,200 hits and over 1,300 runs scored at all levels.