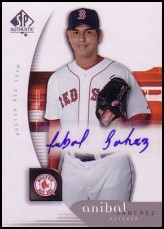 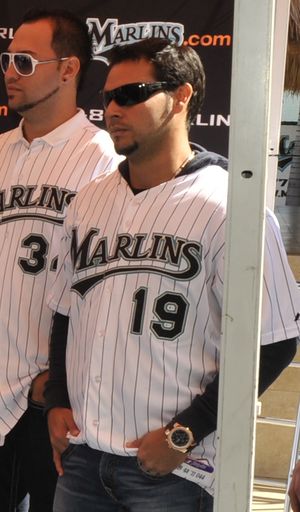 Anibal wears #19 for the Marlins.

Pitcher Anibal Sanchez was signed by scout Carlos Ramirez for the Boston Red Sox in 2001. He made his pro debut with San Joaquin (VSL) in 2001 and then played for Ciudad Alianza (VSL) in 2002. Sánchez missed the entire 2003 season due to Tommy John surgery. The next season, he came stateside with the Lowell Spinners in the Boston Red Sox organization, going 3-4 with a 1.77 ERA and a New York-Penn League high 101 strikeouts. He began the 2005 season with the Wilmington Blue Rocks, where he went 6-1 with a 2.40 ERA in 14 starts, before being promoted to the AA Portland Sea Dogs, where he went 3-5 with a 3.45 ERA in 11 starts. After that season, he was traded to the Florida Marlins in a multi-player deal that brought Josh Beckett and Mike Lowell to Boston, with Hanley Ramirez also headed to Florida.

Sanchez began 2006 with the Carolina Mudcats, where he went 3-6 with a 3.15 ERA in 15 starts. He was promoted to the majors in June of that year and soon established himself in the Marlins' rotation. He went 6-2 in his first 12 starts for the club. In his 13th start, on September 6th, Sanchez pitched a no-hitter against the Arizona Diamondbacks. He finished his rookie season with an outstanding record of 10-3, 2.83 in 18 games. Unfortunately, injuries would almost wipe out his next two seasons. In 2007, he made only 6 starts, going 2-1, 4.80, then in 2008, he was limited to 10 starts and was hit hard during those, ending the season 2-5, 5.57.

Aníbal began to get back on track in 2009, although his won-loss record of 4-8 did not show it. In fact, he pitched much better than in his previous two injury-shortened season, putting up a 3.87 ERA in 16 starts, good for a 111 ERA+ over 86 innings. He finally got back to where he was heading as a rookie with his 2010 season. He went 13-12 with a 3.55 ERA and 157 strikeouts and formed part of an excellent young starting rotation for the Marlins, alongside Josh Johnson, Chris Volstad and Ricky Nolasco. He recorded his first complete game and shutout since his rookie year. He led the team in both starts (32) and innings pitched (195) as Johnson was shut down early in a preventive move.

Early in the 2011 season, Sanchez twice came close to recording a second career no-hitter. On April 22, he kept the Colorado Rockies hitless until the 9th inning, when Dexter Fowler singled, but still recorded a one-hitter in a 4-1 win. On May 8, he stymied the Washington Nationals' bats until the 7th, which Laynce Nix led off with a single. He left the game having given up only two hits in 7 innings and got credit for an 8-0 win. He did it again on September 10th, when he pitched another one-hitter over the Pittsburgh Pirates, beating them 3-0. He recorded 11 strikeouts on the night, although the hit came early, courtesy of a 2nd-inning double by Neil Walker, erasing any thoughts of another no-no. The win moved Anibal to 8-7 on the year. He finished the season 8-9, a record that belied how well he pitched, as he was on the mound for 196 1/3 innings, with a 3.67 ERA and struck out 202 batters.

Not necessarily known as a hitter, Anibal had the distinction of being the first batter to ever hit a triple at Marlins Park, in the Marlins' fourth home game of the 2012 season; it came off the Houston Astros' J.A. Happ in the 5th inning on April 15th, but the bases were empty and he was left stranded on base. It was his first career extra-base hit, and he was hitting .087 for his career before the at-bat. On July 23rd, he was sent to the Detroit Tigers along with infielder Omar Infante in return for three prospects led by P Jacob Turner. He was 5-7, 3.94 in 19 starts, but the Tigers had struggled to find consistent starting pitching behind ace Justin Verlander. In his first start for the Tigers on July 28th, he was roughed up by the Toronto Blue Jays, giving up homers to Edwin Encarnacion, Colby Rasmus and Yunel Escobar for 5 runs in 6 innings as the Tigers lost, 5-1. He ended up going 4-6 in 12 starts for the Bengals, for a combined record of 9-13, 3.86, with 167 strikeouts in 195 2/3 innings. He lost Game 3 of the ALDS against the Oakland Athletics on October 9th by a 2-0 score, then pitched 7 shutout innings in Game 2 of the ALCS facing the New York Yankees. He then started Game 3 of the 2012 World Series against the San Francisco Giants on October 27th. He pitched well, giving up only 2 runs on 6 hits in 7 innings, while striking out 8, but his teammates failed again to give him any runs and he was charged with the 2-0 loss. On December 14th, he re-signed with the Tigers for 5-years for $80 million.

He pitched for the Venezuelan national team in the 2013 World Baseball Classic but had their highest ERA. In his only outing, he was torched by the eventual champion Dominican Republic, retiring one of seven batters. He allowed a single to José Reyes, made an error on an Erick Aybar bunt then gave up a two-run double to Robinson Canó. He got his only out by fanning Edwin Encarnación. Hanley Ramírez hit into a fielder's choice and Nelson Cruz singled for a 3-0 lead. After Sánchez walked Carlos Santana, he was yanked in favor of César Jiménez; his team lost the game, 9-3, and failed to make it out of the first round despite several big league stars.

On April 26, 2013, Sánchez set the Tigers franchise record by striking out 17 batters in a 10-0 win over the Atlanta Braves. He set the record over 8 innings, having struck out the side in the 8th to beat the record previously held by Mickey Lolich, but having already thrown 121 pitches, was not given an opportunity to go out for the 9th inning and attempt to match the major league record of 20. On May 24th, he made a strong bid for a second career no-hitter, setting down the Minnesota Twins over the first 8 innings before allowing a single to Joe Mauer with one out in the 9th. He then struck out the next two batters to finish the game, but had to settle for a one-hit shutout, 6-0. He was placed on the disabled list on June 17th with a strained right shoulder, although Tigers officials were not overly worried, expecting him to only miss a couple of starts. Indeed, he made 29 starts that season and finished with the best ERA in the American League at 2.57, to go along with a record of 14-8. He lost his only start of the ALDS against the Oakland A's, 6-3, but came back with a brilliant performance in Game 2 of the ALCS, keeping the Boston Red Sox scoreless for 6 innings and received credit for the Tigers' 1-0 win. He made another start in Game 5 of the ALCS, but this time lost the game, 4-3, as the Red Sox went on to win the World Series.

Sanchez had some health issues in 2014 and as a result pitched only 22 times, with 21 starts. He was 8-5, 3.43 during that span, logging 126 innings, and concerns about his health lead the Tigers to acquire David Price from the Tampa Bay Rays at the trading deadline. He pitched just once in the regular season after August 8th, a one-inning relief stint on September 26th, until called upon in a key situation in Game 2 of the ALDS against the Baltimore Orioles on October 3rd. He relieved Justin Verlander with a 5-3 lead in the bottom of the 6th and pitched two excellent innings, retiring all six batters he faced in order, before handing the ball to Joba Chamberlain in the 8th. However, Joba and Joakim Soria both faltered, and the Orioles ended uip scoring 4 runs in the 8th to win, 7-6, on their way to a series sweep.

Anibal started the 2015 season slowly and was only 4-7, 5.16 after 13 starts when he unleashed a gem on June 15th, shutting out the Cincinnati Reds on 2 hits, 6-0, for his first complete game and shutout in over two years. On July 3rd, he pitched 7 no-hit innings against the Toronto Blue Jays before Ezekiel Carrera singled with one out in the 8th; he gave up another hit before giving way to Alex Wilson and then almost lost the game was the Jays rallied to score 6 runs that inning, but he ended up an 8-6 winner. He went 10-10, 4.99 that season, pitching 157 innings in 25 starts. However, he struggled in 2016, when he made 26 starts in 35 appearances but only reached 153 1/3 innings, the result of a lot of early exists after being hit hard. His record was 7-13, to go with an ERA of 5.87, the highest of his career thus far. However, he kept plumbing the depths in 2017, as he combined ill-health and inefficiency in one explosive package. Used as a swingman, he was threatening to see his ERA rise for the fourth straight year since leading the AL in the category in 2013. On August 6th, starting for an injured Michael Fulmer, he gave up 5 homers against the Baltimore Orioles, starting with three consecutive shots by Jonathan Schoop, Chris Davis and Trey Mancini in the bottom if the 1st. Joey Rickard followed suit in the 2nd and Manny Machado in the 4th, ending his day and tying a Tigers record. He was charged with the 12-3 loss. On September 5th, he had a start last only 5 pitches against the Kansas City Royals as he was hit in the right leg by a ball off the bat of Whit Merrifield and had to leave the game with a bruised calf. He finished the season at 3-7, 6.41 in 28 games.

Sanchez signed a deal with the Minnesota Twins before spring training in 2018, hoping to capitalize with that team's lack of starting pitching, but he was released just three weeks into camp, on March 11th, after the Twins had signed veteran Lance Lynn as a free agent. On March 16th, he latched on with the Atlanta Braves in what seemed like an afterthought, as the Braves clearly wanted to give priority to their numerous young pitchers. Sanchez did well in his first 3 appearances, going 1-0, 1.29, but then went on the DL in mid-April with a hamstring strain. After a couple of unconvincing appearances with the Gwinnett Stripers in late May, when he gave up 8 runs in 6 2/3 innings, he came back to Atlanta and soon began to flash some of his old talent. On June 9 and 14th, he won back-to-back starts to improve to 3-0, and in the second of these pitched 7 scoreless innings while allowing just 4 hits and no walks to defeat the San Diego Padres, 4-2. Suddenly, the Braves had no choice but to give him a regular turn on the mound, as he was pitching as well as anyone on the staff even if the team now had a surplus of healthy starters. He ended up going 7-6 with an excellent 2.83 ERA in 25 games, giving up just 106 hits in 136 2/3 innings while striking out 135 opponents in what was his best year since that in which he won his ERA crown back in 2013. The Braves gave him the ball to start Game 2 of the NLDS against the Los Angeles Dodgers, but he could not pull off a miracle, allowing 3 runs in 4 2/3 innings to be charged with his team's 3-0 loss.

Sanchez became a free agent after the 2018 season and on December 20th signed a tentative two-year deal with the Washington Nationals worth $19 million, his comeback season having served him very well. The deal was only finalized a week later, on December 27th, after he had successfully passed a physical