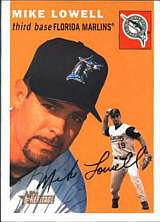 Mike Lowell announced his retirement after playing for the Boston Red Sox in 2010. During his last two seasons, he was slowed down considerably by hip injuries. He has worked for MLB Network as an analyst since retiring. His father Carlos Lowell pitched for the Puerto Rican national team.