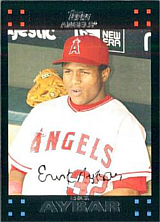 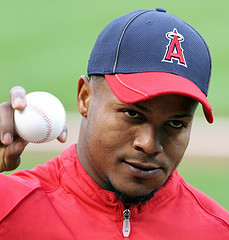 Erick Aybar is the brother of Willy Aybar and the uncle of three brothers all known as Wander Franco: Wander Javier Franco, Wander Alexander Franco and Wander Samuel Franco. He was signed as an amateur free agent in 2002 by scouts Leo Perez and Clay Daniel for the Anaheim Angels. He made his pro debut that summer for the Provo Angels, his time there coinciding with author Matt McCarthy, who chronicled his taste of the minors in his 2009 memoir Odd Man Out: A Year on the Mound With a Minor League Misfit. Aybar hit over .300 in each of his first four minor league seasons, hitting lots of triples and getting lots of stolen bases. A peak year for Erick was 2004 with Rancho Cucamonga, when he hit .330 with 14 home runs and 11 triples. He stole 51 bases and was caught 36 times. 2006 found him in Triple A ball with Salt Lake, where he hit .283 in a partial season.

Aybar made his major league debut with the now Los Angeles Angels in 2006, hitting .250 in 34 games. Over the next ten seasons, he won a Gold Glove (2011) and made an All-Star Game appearance (2014) while batting .276/.315/.378 in 1,220 games. On November 12, 2015, he was traded, along with $2.5 million and top pitching prospects Sean Newcomb and Chris Ellis, to the Atlanta Braves for Andrelton Simmons and minor league catcher Jose Briceno. On May 19, 2016, he missed a game for an unusual reason: he had to be rushed to hospital after getting a chicken bone lodged in his throat while eating lunch. The Braves were off to a dreadful start, and so was he, as he was hitting a mere .174 at the time. On August 16th, he was traded to the Detroit Tigers in return for Mike Aviles and Kade Scivicque in a move designed to make space for the Braves to call up their top prospect, Dansby Swanson. Aybar had recovered from his dreadful start, but was still hitting only .242 in 97 games with 2 homers and 26 RBI. He was joining a team in the hunt for a postseason slot that had recently been hit by a string of injuries, including to starting shortstop Jose Iglesias. He hit .250 in 29 games for the Tigers, to finish at .243 in 126 games, with 3 homers, 34 runs scored and as many RBI. In 2017, he joined the San Diego Padres, hitting .234 in 108 games with 7 homers but just 22 RBI. He stayed in San Diego that one season, then in 2018 signed a minor league contract with the Minnesota Twins. However, he was joining a team with a number of experienced middle infielders and opted out of his deal in March. He joined the Acereros de Monclova of the Mexican League in July 2018.