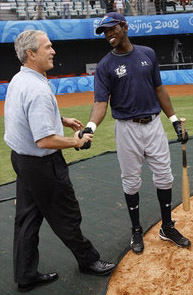 Dexter Fowler was a highly-rated prospect from 2004-2007. In 2008, he made his major league debut with the Colorado Rockies.

Fowler was a high school star, hitting .457 and slugging 1.028 with 23 steals and 14 home runs in 105 AB. Baseball America and USA Today named him a first-team high school All-American outfielder. Entering the 2004 amateur draft, Baseball America rated him as the #10 position player prospect. He fell to the 14th round, though, because he had made a commitment to the University of Miami and teams did not want to risk a lost pick if Fowler went to college. The Colorado Rockies picked him in the 14th round of the draft. He was signed by scout Damon Iannelli for a $925,000 bonus to set a new record for a signing bonus for that round as he took the money instead of heading on to Miami. His bonus was equivalent to a high second-round pick.

Fowler made his professional debut with the 2005 Casper Rockies, hitting .273/.357/.409 with 18 steals in 24 tries. He struck out in 73 of 220 AB. Baseball America still rated him as the #7 prospect in the Northwest League. In 2006, the 20-year-old switch-hitter batted .296/.373/.462 for the Asheville Tourists with 92 runs and 43 steals (caught stealing 23 times). He was 9th in the South Atlantic League in average. He didn't come close to leading his team in steals - Eric Young Jr. swiped over twice as many. He tied for third in the league in steals. Fowler was named the SAL's "Most Exciting Prospect" by Baseball America and the league's #10 prospect, between Brandon Erbe and Deolis Guerra.

Fowler hit .266/.380/.376 for the Waikiki Beach Boys that winter. He was named to the Hawaii Winter Baseball All-Star outfield, joining John Mayberry, Jr. and Nyjer Morgan, both considerably older players. In 2007, Dexter batted .273/.397/.367 in 65 games for the Modesto Nuts with 20 steals in 31 tries. A fractured right hand cut his season short. Baseball America named him the best defensive outfielder in the California League and the #10 prospect overall, right behind Chris Davis. They also named him the 3rd-best Rockies prospect.

In the 2007 Arizona Fall League, Fowler only hit .224 for the Peoria Javelinas. Baseball America rated him as the loop's #9 prospect, between Jordan Schafer and Taylor Teagarden.

Fowler was the USA's main center fielder in the 2008 Olympics and hit .250/.300/.429. His best game came in the 4-2 win over the Taiwan national team when Fowler tripled, doubled, scored and drove in runs. Despite hitting leadoff at times, Fowler did not try to steal in 9 games. The USA finished with a Bronze. He made his big league debut with the Rockies later that summer, going 4 for 26 in 13 games. He then became the team's starting center fielder in 2009, putting up a batting line of .266/.363/.406 in 135 games. He stole 27 bases, but his total fell to 13 in 2010 as he continued as Colorado's primary center fielder. The rest of his batting line was quite similar to his rookie season (.260/.347/.410), and he did not entirely lose his speed as he led the National League with 14 triples. He got a taste of postseason action in the 2009 NLDS against the Philadelphia Phillies, when he went 3 for 14 in 4 games.

On December 3, 2013, Fowler was traded with a player to be named later to the Houston Astros in return for two younger players, OF Brandon Barnes who was expected to replace him as the Rockies' centerfielder, and P Jordan Lyles. He got his Astros career off to a fast start on Opening Day on April 1, 2014 against the New York Yankees. He doubled off CC Sabathia to lead off the bottom of the 1st, then came in to score the first run of a four-run inning, and doubled and scored again in the 2nd as the Astros won, 6-2. He then homered and tripled in the team's second game, a 3-1 win over the Yankees on April 2nd. He was the first player in Astros history to collect two extra-base hits in his the first two games of the year. He ended up playing 116 games with Houston, hitting .276 with 8 homers and 35 RBIs; he scored 61 runs but stole only 11 bases, but matched the highest OPS+ of his career at 119. With Houston brimming over with young outfielders, on January 19, 2015, he was traded to the Chicago Cubs in return for 3B Luis Valbuena and P Dan Straily.

Fowler was the regular centerfielder for the Cubs in 2015 and while he hit only .250 in 156 games, he compensated by drawing 84 walks for a .346 OBP and also stole 20 bases. With a number of power hitters coming up behind him, he scored 102 runs and contributed unexpected power himself, with 29 doubles, 8 triples and 17 homers. This varied production was good for an OPS+ of 108 as the Cubs won 97 games to claim a wild card slot in the National League. He had a humdinger of a game in the Wild Card Game against the Pittsburgh Pirates on October 7th. He led off the game with a single off Gerrit Cole, then quickly stole second and scored on Kyle Schwarber's single. He singled again in the 3rd, and came home to score when Schwarber hit a long home run, then in the 5th, he homered off Cole for the Cubs' fourth run. Chicago won, 4-0, behind yet another great pitching performance by Jake Arrieta. he then went 3 for 16 with another homer as the Cubs upset the St. Louis Cardinals in the NLDS. He hit .250 with a double in the Cubs' sweep at the hands of the New York Mets in the NLCS.

Fowler became a free agent after the 2015 season, but because the Cubs made him a qualifying offer which he rejected, any team that signed him had to give up a top draft choice, making it harder for him to find a match. He had to wait until February 23, 2016. when spring training had already opened, to agree to a deal with the Baltimore Orioles, who had signed P Yovani Gallardo under similar circumstances only days earlier. The deal was reported to be for three years and $35 million. However, it turned out that the news was premature, as in the end Fowler rejected the Orioles' offer and instead re-signed with the Cubs for one year and $13 million. The stunning turnaround shocked his Cubs teammates, many of whom had publicly expressed their sadness over seeing him leave. It turned out to be an inspired move by the Cubs, as Fowler got off to an excellent start, being a key contributor to the Cubs having the best record in the majors in the early going. After 64 games, he was hitting .290 with 7 homers, 41 runs and 28 RBIs when he was placed on the disabled list on June 20th with a hamstring injury. In spite of the injury, he was voted one of the National League's starting outfielders at the 2016 All-Star Game. The Cubs suffered in his absence as they went through their worst stretch of the year. He returned to action on July 22nd and homered in a 5-2 win over the Milwaukee Brewers. He finished the year at .276 in 125 games, with 13 homers, 84 runs and 43 RBIs. he had a particularly good series against the Los Angeles Dodgers in the NLCS, hitting .333 with 3 doubles and a homer, then contributed 7 hits, including a pair of homers, in Chicago's historic over the Cleveland Indians in 7 games in the 2016 World Series.

Fowler became a free agent again after the 2016 season, and this time found a team willing to offer him a multi-year deal. On December 9th, news emerged that the St. Louis Cardinals were the successful suitor, with an offer of $82.5 million over five years. He spent four seasons with the Cardinals, and while the first one, in 2017, was pretty good, the next three were disappointments. In his first year with the Redbirds, he hit .264 in 118 games, with 22 doubles, 9 triples and 18 homers, scored 68 runs and drove in 64. He was not used as a lead-off hitter by his new team, but his OPS+ of 122 was almost identical to the one he had put up in the Cubs' championship season. In 2018, however, he fell off a cliff, hitting just .180 in 90 games, with his OBP falling from an excellent .363 to an awful .278, as did his OPS+, all the way to 59. The less said about that year the better. In 2019, the Cardinals made it back to the postseason after having been absent for three years, and Dexter nounced back to an OPS+ of an even 100. He batted .238 in 150 games, with 24 doubles and 19 homers, driving in 67 runs. The power was nice, and he did draw 74 walks, bringing his OBP back into decent territory, at .346. He struggled badly in the postseason, however, going a combined 2 for 33 (.061) in two series as the Cardinals were swept by the Washington Nationals at the NLCS stage. In 2020, he appeared in only 31 games in the shortened season, and only had 90 at-bats, with below-average production: a batting line of .233/.317/.389, 4 homers and 15 RBIs. The Cardinals returned to the postseason, and this time he did a bit better, going 4 for 14 (.286) with a run and two RBIs as St. Louis was defeated by the San Diego Padres in the Wild Card Series.

On February 4, 2021, he was traded to the Los Angeles Angels in return for future considerations. The Cards also threw in a large sum of money to cover the majority of his salary for the upcoming season, the last remaining on the contract he signed after the 2016 World Series. The move was designed to allow top prospect Jo Adell, who had struggled badly at the major league level in 2020, a chance to play in the minors at the start of the season. However, Dexter played only 7 games for his new team, going 5 for 20, before suffering a season-ending torn ACL in a game against the Toronto Blue Jays on April 9th.

Dexter's wife Darya immigrated as a three-year-old child from Iran, one of the countries targeted by President Donald Trump in his so-called "Muslim travel ban" signed immediately after his inauguration in January 2017. Fowler was vocal in criticizing the measure, which created significant complications in plans to meet up with his in-laws.