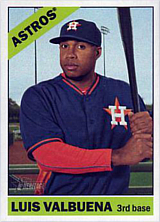 Luis Valbuena was signed by scout Emilio Carrasquel for the Seattle Mariners in 2002. He made his pro debut for the Aguirre (VSL) club in 2003-2004 before coming stateside in 2005.

Valbuena and fellow major leaguer Jose Castillo were killed in a car accident in Venezuela on December 6, 2018. They were coming home after playing a game for the Cardenales de Lara in the Venezuelan League. Another teammate, Carlos Rivero, was driving the car but survived the accident, which was caused by highway robbers who placed a rock on the road to cause the crash, then stripped the passengers of their belongings. Four men were arrested in relation with the crime the following day.