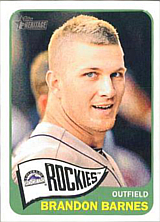 Brandon Barnes became the starting center fielder and leadoff hitter of the Houston Astros in 2013, after making his debut late in the 2012 season. He first drew attention for some outstanding catches at Minute Maid Park and its vast outfield expanse, but on July 19, he let his bat do the talking. Brandon became the 8th player in Astros history to hit for the cycle in a game against the Seattle Mariners. He hit a solo home run to center field off Joe Saunders in the 2nd, then followed with a triple in the 4th. He singled in the 6th then lined a double down the right field line in the 8th, beating Michael Saunders' throw to second by a whisker. He added an infield single in the 9th to finish 5 for 5, but alas the Astros lost the game, 10-7. His 4th-inning triple was his only one that year. He finished the season at .240/.289/.346 in 136 games. On December 3, he was traded to the Colorado Rockies, along with pitcher Jordan Lyles, in return for a player to be named later and center fielder Dexter Fowler, a very similar player with a better track record of hitting and getting on base.

On June 14, 2014, Barnes stunned the San Francisco Giants with a two-out, two-run inside-the-park homer off closer Sergio Romo to give the Rockies a 5-4 win. It was his second homer of the year, and both had been of the inside-the-park variety, as he also pulled the trick off Brad Ziegler of the Arizona Diamondbacks on June 5. He stuck around Denver for three years before his release in the middle of September 2016. He spent 2017 in the minors with the Miami Marlins and made a big league cameo in September 2018 for the Cleveland Indians. A two-time All-Star with the Columbus Clippers of the International League, the Indians sent him to the Minnesota Twins in August 2019, but he did not earn another big league cameo and became a free agent at season's end.

In his spare time, Barnes is a talented visual artist, producing full-sized paintings in a graffiti style. He also uses his own body as a canvas, as he sports some colorful tattoos on his left forearm and legs which he designed himself.