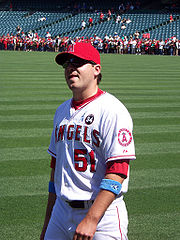 Joe Saunders was drafted by the Anaheim Angels in the 1st round of the 2002 amateur draft. He was signed by scout Chris McAlpin for $1.825 million and made his pro debut that summer.

Saunders made his major league debut with the Los Angeles Angels of Anaheim in 2005. Back in the minors in 2006, he was called up in mid-July to start in place of the injured Kelvim Escobar. He was doing quite well in triple-A, with a record of 10-3 at the time.

He won his first major league start, giving up two earned runs in 7 innings, and was apparently sent back down to the minors afterwards. He came back, though, and started 13 games with a record of 7-3 over the remainder of the season. He won over 15 games in both 2008 and 2009 and was named to the All-Star team in 2008.

In July 2010, Saunders was traded to the Arizona Diamondbacks with Rafael Rodriguez, Patrick Corbin and a player to be named later for Dan Haren. In 2011, he went 12-13 in 33 starts for Arizona, pitching a career-high 212 innings with a 3.69 ERA. He started Game 4 of the NLDS against the Milwaukee Brewers but gave up 3 runs 3 innings and was not involved in the decision. In 2012, he started 21 games for Arizona, going 6-10, 4.22, before being traded to the Baltimore Orioles in return for Matt Lindstrom on August 26th. He went 3-3, 3.63 in 7 starts for the Orioles down the stretch, helping them reach the postseason for the first time since 1997. Overall, his record was 9-13, 4.07 in 28 starts. The Orioles picked him to start the American League Wild Card Game against the Texas Rangers on the road on October 5th and he came up big, giving up a single run in 5 2/3 innings, earning the win as the Orioles moved on to face the New York Yankees in the ALDS thanks to a 5-1 win. He was back on the mound in another must-win situation in Game 4 of the ALDS on October 11th, and repeated his earlier postseason performance, giving up a single run in 5 2/3 innings. The Orioles went on to win the game, 2-1, in 13 innings, but lost the decisive Game 5 the next day.

On February 7, 2013, Saunders signed a one-year contract with the Seattle Mariners on the same day as word came out of the M's record-setting deal with ace Felix Hernandez for $175 million. Needless to say, Saunders' deal was for considerably less money, but still reflected his status as an above-average starting pitcher.