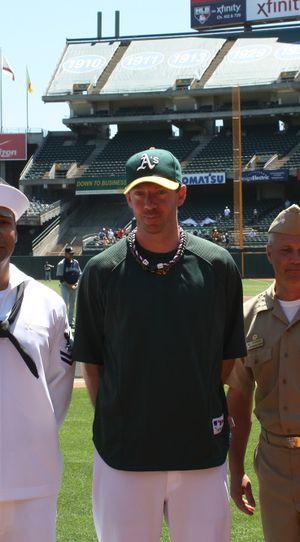 Pitcher Brad Ziegler bounced around the minor leagues for a number of years before adopting a submarine motion and reaching the Major Leagues with the Oakland Athletics in 2008. On July 27, 2008, he set a record when he pitched his 27th consecutive scoreless inning in his 23rd outing of the season. He passed George McQuillan who had begun his career with 25 consecutive scoreless innings in 1907. The streak reached 39 innings (tying Al Benton's 1949 record for consecutive scoreless relief innings) before being snapped by the Tampa Bay Rays on August 14th. Ziegler took over from Huston Street as the A's closer at the end of the season, then was added to Team USA's roster for the 2009 World Baseball Classic.

He moved to the Arizona Diamondbacks in 2011 after a deal at the trading deadline and a few years later in 2015, was named the team's closer at the age of 35. He had been used to save ballgames before, racking up 11 saves as a rookie and 13 in 2013, but this was his first extended try in the job and he did very well, ending up with 30 saves and a 1.85 ERA in 66 games. On July 9, 2016, he was traded to the Boston Red Sox in return for two minor leaguers shortly after Boston closer Craig Kimbrel had injured his knee. Brad was 2-3 with 18 saves and a 2.82 ERA in 36 games at the time. At the time of the trade, he was the Diamondbacks' all-time franchise leader for games pitched, with 348. He pitched 33 times for Boston, going 2-4, 1.52 with 4 saves, giving him a combined record of 4-7, 2.25 with 22 saves in 69 games. He also pitched once in the postseason, giving up a walk and striking out a batter in two-thirds of an inning in Game 2 of the ALDS against the Cleveland Indians.

Ziegler became a free agent after the 2016 season and on December 16th, he signed a two-year deal with the Miami Marlins for $16 million. Over the span of three days in April of 2017, he was called to the mound twice with a no-hitter on the line. On August 16th, Dan Straily, Jarlin Garcia and Kyle Barraclough had managed to keep the New York Mets hitless through seven innings before Brad took the mound. However, he gave up a two-out single to Neil Walker. On April 18th though, after Wei-Yin Chen had pitched seven hitless innings against the Seattle Mariners, he took over and managed to get through the 8th unscathed, in spite of two tricky ground balls that almost went for hits. He then turned the ball over to Barraclough, who gave up a one-out double to Mitch Haniger in the 9th as the Marlins had to settle on a 5-0 one-hitter (in the earlier game, the Mets had got a few more hits after their initial one, but the Marlins had eventually won the game, 3-2, on J.T. Riddle's walk-off homer in the bottom of the 9th).

Ziegler is a very atypical pitcher. His fastball tops out below 85 mph, which is slower than many pitchers' change-up. He does not rack up many strikeouts, but what makes him effective is that his fastball has ample downward movement. Whereas the typical fastball will float, giving the illusion that it rises, Ziegler's falls sharply as it heads towards the plate, the result of his submarine pitching motion (strong downward movement on a fastball is almost always associated with a submarine pitching style). As a result, his pitches will tend to turn into ground balls, giving him the highest ground ball ratio of any pitcher in the majors. He gives up relatively few hits and very few home runs, making him an effective pitcher.