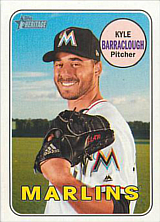 Pitcher Kyle Barraclough was drafted twice, first by the Minnesota Twins in the 40th round of the 2011 amateur draft, and a second time in 2012, in the 7th round, when he signed with the St. Louis Cardinals. He made his professional debut in 2012 with the Batavia Muckdogs of the New York-Penn League and also pitched for the Quad Cities River Bandits, with a combined record of 0-3, 3.06. In 2013, he only pitched 3 times with the GCL Cardinals, but he was back in full health in 2014, pitching 48 times, all in relief, with the Peoria Chiefs and Palm Beach Cardinals. He was 2-2, 2.47 with 11 saves and struck out 78 in 58 1/3 innings. In 2015, he started the year with Palm Beach then, after 11 games, was promoted to the Springfield Cardinals of the Texas League, his first time in Double A. He had an ERA of 0.60 at Palm Beach and 3.28 in 23 games for Springfield when he was included in a trade. On July 24, the Cardinals sent him to the Miami Marlins in return for reliever Steve Cishek. Two weeks after being traded, on August 7, Kyle made his major league debut for the Marlins against the Atlanta Braves, pitching a perfect 8th inning in a 6-3 loss.

In April 2017, he was twice called upon to preserve a combined no-hitter in the late innings in a span of three days. On April 16, facing the New York Mets, he relieved Dan Straily and Jarlin Garcia to start the 7th, and retired the Mets in order, handing the ball to Brad Ziegler who eventually gave up a hit to Neil Walker with two out in the 8th. On April 18, Wei-Yin Chen had pitched 7 hitless innings against the Seattle Mariners and Ziegler followed with a hitless 8th, putting Kyle on the spot for the 9th. He retired the first batter before giving up a double to Mitch Haniger to end the bid, but retired the last two batters to preserve the one-hitter, a 5-0 shutout. After ascending to the closer's job in the middle of 2018, Barraclough was dealt at season's end so the Marlins could pinch some pennies and avoid paying him a modest raise in arbitration. Sent to the Washington Nationals for international slot value, he struggled to a demonic 6.66 ERA in 33 appearances before moving to Double A Harrisburg, closer than the Nats' Triple A affiliate in Fresno, to work things out. In August, he was designated for assignment and claimed by the San Francisco Giants, for whom he spent two stints in the bullpen. At season's end, he became a free agent.