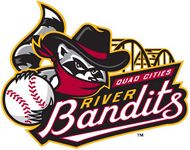 The Quad Cities River Bandits, of the Midwest League and briefly in High-A Central, took the regional locale name in 1962. The Kansas City Royals farmhands play their home games at Modern Woodmen Park in Davenport, IA.

The wild success of MLB's 2021 Field of Dreams Game, played on the farm where the famous film was shot, generated at least one more on August 11, 2022. A few weeks into the 2022 season, MLB announced a minor league precursor two days earlier between eastern Iowa's two teams - the Bandits and the Cedar Rapids Kernels. Although Cedar Rapids is 20 miles closer to the farm than the Quad Cities, the Bandits were designated the home team in the neutral-site affair. Both teams used throw-back nicknames - the Bandits using the Davenport Blue Sox ID they used during three stretches between 1913 and 1937 with the Kernels using the Cedar Rapids Bunnies moniker of 1904-1932. The Sox won, 7-2, in front of 7,532 fans.

MLB's 2021 Minor League Reorganization raised the Bandits, and most of the Midwest League, one level. Originally listed for elimination, they squeaked through as MLB winnowed the MwL from 16 teams to 12 and switched the Bandits from the Houston Astros to the Royals.

Davenport professional ball traces to 1879. Over the next 40 years, Davenport and the Illinois cities Rock Island and Moline began calling themselves the Tri-Cities. Around the time then-Municipal Stadium opened in 1931, East Moline, IL, was getting into the act and the name "Quad Cities" was born. Bettendorf, IA, passed East Moline in population in the late 1940s, but an effort to rebrand as "Quint Cities" failed.