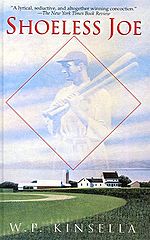 The plot revolves around Iowa corn farmer Kinsella, a baseball obsessive, who hears voices telling him to build a baseball field in his plot of land ("If you build it, they will come"). After he builds the field, much to the dismay of his wife, ghosts of past baseball players start appearing on the field, while Kinsella undertakes a cross-country trek to meet reclusive writer Mann and bring him to a baseball game, and eventually to the "Field of Dreams".

Like Costner's previous baseball movie, Bull Durham, Field of Dreams was a big success, both critically and at the box office. He later made a third baseball film, For Love of the Game.

The ballpark built in a cornfield for the purpose of shooting the film was preserved as a tourist attraction in Dyersville, IA.

This page is in need of some additional content. Please help the Bullpen by expanding it, or learn how to contribute.
Retrieved from "https://www.baseball-reference.com/bpv/index.php?title=Field_of_Dreams&oldid=1020819"
Categories:
Hidden category: