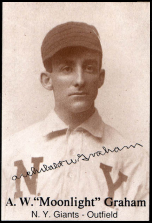 "The New York Nationals have secured in Archie Graham the fastest base runner in the Manchester Club, in fact I doubt if there is a player in the league who is faster on his feet than this chap. How he can get over the ground. He will be a revelation to the habitues of the Polo Grounds without a doubt. He ought to hold his job by his feet as it were. He is a prime favorite in Manchester." - Sporting Life's Boston correspondent, in the October 29, 1904 issue

"Dr. Archie Graham, who is to join the Giants as soon as he completes his examinations at the Baltimore Medical College, is known among minor league players as 'Moonlight' because he is supposed to be as fast as a flash." - Sporting Life, March 25, 1905

Archibald "Moonlight" Graham attained baseball fame for not batting in a major league game. The 28-year-old Graham made his major league debut for the New York Giants on June 29, 1905 against the Brooklyn Superbas. He played outfield but never had a chance to make it to the plate. He never played in a major league game again after that day.

After his career, Doc Graham obtained his medical degree. He moved to Chisholm, Minnesota and became a town doctor. He served as the school doctor for the town of Chisholm for 44 years. He was also well known for his love of hats for his wife, a trait played up in the movie in which he was a character.

His brother Frank Porter Graham was the President of the University of North Carolina and later a United States Senator from North Carolina.

Graham gained immortality as a character in the 1982 novel Shoeless Joe by W.P. Kinsella, which was later adapted into the movie Field of Dreams.

In the film, protagonist Ray Kinsella (played by Kevin Costner) is sent to Fenway Park with writer Terrence Mann by a disembodied voice (also saying, "If you build it, he will come" and "Ease his pain"). At the game, a Baseball Encyclopedia entry flashes up on the scoreboard for only Ray and Terrence to see: Moonlight Graham, one game, no at-bats. The disembodied voice tells them, "Go the distance..." and the pair drive off to Chisholm, Minnesota, to find out what they can about the man and his mysterious major league career. Graham was portrayed by Burt Lancaster in the movie.

The movie presumes that getting to the major league is the main goal, but in fact many ballplayers of Graham's time played in regional minor leagues that might be as good as some of the major league teams. It is clear that Graham had a minor league career (and probably played in college too), but the details are sketchy. Graham apparently graduated from the University of North Carolina in 1902, after attending there for some of the period 1895-1902. Graham played with Nashua in 1903 and Manchester in 1904. He played with Charlotte and Scranton in 1905, and Scranton and Memphis in 1906. In 1907, he was with Memphis. Some sources say he played for years with Charlotte before coming up to the Giants, and one sportswriter says he remembers interviewing Graham in 1903 when he was with the Charlotte team. One source [citation needed] says Graham was invited previously to play for the Giants, but turned down the invitation because he was attending medical school.

The movie has spawned a band in Cincinnati called 'Moonlight Graham' and a scholarship awarded to graduates of Chisholm High School.

In the year in which Graham appeared, the New York Giants won the World Series. If Series rings had been awarded, Graham presumably would have gotten one. He was the second player from the University of North Carolina to get to the majors. After his cup of coffee in the majors, he won the 1906 New York State League batting title with the Scranton Miners with a .336 average.

There is considerable uncertainty about his date of birth: he listed it as November 12, 1879 on his World War I draft registration card, and again at the time of the World War II draft, but he appears in the 1880 census as a two-year old, his grave has him born in 1876, the Social Security Death Index gives the year as 1878, on his Social Security application, he wrote down 1877, and his Sporting News player card has 1881. His birthday also is either November 10, 11 or 12 depending on the source.

"Eddie Ashenbach says 'he is the fastest man he ever saw in a baseball uniform,' and that 'he can easily beat Harry Bay'." - Sporting Life, March 11, 1905, quoting Edward Ashenbach about Moonlight Graham's speed