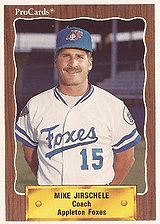 Mike Jirschele was selected by the Texas Rangers in the 1977 amateur draft. An infielder, he played in the minor leagues for 13 years, six of them at AAA. He never hit above .251 in a full season nor did he hit 10 homers.

In 1990-1991 he was a coach for the Appleton Foxes, beginning a coaching/managing career with the Kansas City Royals. In 1994 he became the first class A manager to win the Minor League Manager of the Year award after almost 50 years of the award's existence. At the time Jirschele was managing the Wilmington Blue Rocks. In 1998, he was the Royals' roving infield instructor, and from 1999 to 2002, he was Kansas City's Coordinator of Instruction. He is currently in his second stint as manager of the Omaha Royals: he led the club from 1995 to 1997 and from 2003 to the present. 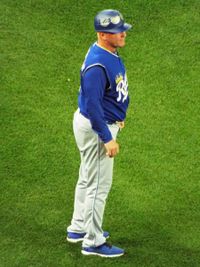 In the 30th round of the 2005 amateur draft, the Royals selected his son Jeremy Jirschele. Another son, Justin Jirschele, played at University of Wisconsin-Stevens Point and signed as a free agent with the Chicago White Sox in 2012.

After the Omaha Royals' 2010 season ended, Jirschele took over as the Kansas City Royals first base coach. He then managed the AAA Omaha Storm Chasers for three seasons before being appointed a coach on Ned Yost's staff in Kansas City in 2014. He was just an additional coach at the start of the year, but the Royals shuffled their coaching staff on May 29th, the result of poor performance by their hitters. As a result, third base coach Dale Sveum was named hitting coach and Jirschele took over his spot in the third base coaching box. He left after the 2019 season.

Jirschele was bench coach for the Quad Cities River Bandits in 2021 and Northwest Arkansas Naturals in 2022.