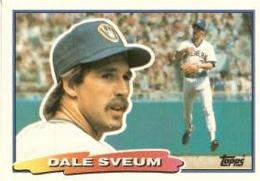 Infielder Dale Sveum played parts of a dozen seasons in the majors and later was a coach and manager.

After attending Pinole Valley High School, where he was a star quarterback, Sveum was selected by the Milwaukee Brewers in the first round of the 1982 amateur draft. He was signed by scouting director Ray Poitevint and scout Harry Smith and made his pro debut that summer with the Pikeville Brewers.

Sveum, pronounced "Swame", reached the majors with Milwaukee in the 1986 season. After a solid rookie campaign, he was the Brewers regular shortstop in 1987 and put together his finest big league season. He hit 3 home runs in a July 17th game against the California Angels; two came off Mike Witt and one off Chuck Finley. Overall, he finished the year second on the Brewers with 25 homers. Late in the 1988 season, he suffered a serious leg fracture in a collision with outfielder Darryl Hamilton, and he did not play in the majors in 1989.

Sveum returned to the Brewers in 1990 and settled into a back-up role, shuttling between the minors and majors for a few years. He moved on to stints with several different clubs before signing with the Pittsburgh Pirates after spending the 1994 season with the Seattle Mariners. He had a bit of a resurgence for the Pirates in 1997, hitting 12 home runs in 126 games at age 33. He moved on to the New York Yankees the next summer. The club went on to win the 1998 World Series, but Sveum was released in August. He played his final season in 1999 with the Pirates.

After his playing career ended, Sveum managed the Altoona Curve of the AA Eastern League for three seasons. He was then the third base coach for the 2004 and 2005 Boston Red Sox, where he gained a reputation as being over-aggressive waving in runners (a criticism that is regularly leveled on third base coaches whether or not there is any statistical evidence of the fact). Before the 2006 season, he returned to Milwaukee as a coach. He was named interim Manager of the team for the final 12 games of 2008 replacing Ned Yost in the middle of a pennant race. The team went 7-5 the rest of the way, just enough to beat the New York Mets by a game in the NL Wild Card race and taking the Brewers to the postseason for the first time since 1982. The Brewers lost to the Philadelphia Phillies in the NLDS, and Sveum returned to the team's coaching staff the next season.

Following the 2011 season, Sveum was the leading contender for two of the prize managerial job openings in the major leagues, those of the Chicago Cubs and Boston Red Sox. On November 17th, he agreed to terms with the Cubs to become their manager in 2012. However, Chicago had a terrible season in his first year at the helm, finishing fifth in the NL Central with a record of 61-101. They were saved from finishing in the cellar only by the Houston Astros having the worst season in franchise history in their last year as a National League team. After the season, Sveum was involved in a hunting incident while out looking for quail in Arizona with former Brewers teammate Robin Yount. As he describes it: "I got drilled with pellets in the back and then one stuck in the ear." Sveum was not seriously hurt although it was "a bloody scene". His players could not pass up such a good opportunity to tease their boss, and on the first day of full workouts in spring training on February 18, 2013, they all removed their warm-up jackets in unison to reveal bright orange hunter's gear; they then gave their manager a similar jacket, with a target painted on it. Sveum took all in good stride. The season was another disappointment, however. The Cubs improved slightly, with 66 wins, but finished last in the NL Central as the Houston Astros, who had finished behind them the previous season, had now moved to the American League. He was fired on September 30th, one day after the end of the year.

In 2014, Sveum was appointed third base coach of the Kansas City Royals, teaming up again with old friend Ned Yost, who was the team's manager. On May 29th, he took over for Pedro Grifol as the team's hitting coach, as a result of terrible struggles by the Royals' hitters, while Mike Jirschele replaced him in the third base coaching box. He was part of the coaching staff when the Royals won the 2015 World Series, defeating the New York Mets in five games. In 2018, he was promoted to bench coach, replacing Don Wakamatsu on Yost's staff. He joined the Royals scouting staff in 2020.

Sveum is a cousin of John Olerud.