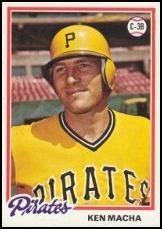 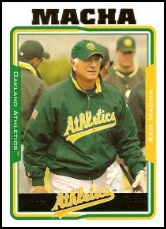 Ken Macha spent parts of six seasons in the majors with the Pittsburgh Pirates, Montreal Expos, and Toronto Blue Jays. He was always a bench player, serving as an emergency catcher and getting some limited playing time as a back-up first baseman, third baseman and outfielder. After his major league career ended, he played with the Chunichi Dragons in Japan from 1982 to 1985.

After his playing career was over, Macha was a Montreal Expos coach from 1986 to 1989 and then for the California Angels from 1992 to 1994, working alongside manager Buck Rodgers for both teams.

Beginning in 1995, he spent four years as a manager in the Boston Red Sox farm system. He joined the Oakland Athletics as a coach in 1999 and took over as the club's manager in 2003, replacing Art Howe. He was fired after the 2006 season, despite leading the club to that year's American League Championship Series. It might also be noted that the club had achieved 93 wins despite having a Pythagorean of only 85 wins, something that might partly be attributed to Macha's managerial skill. Macha was under a three-year contract that was to expire in 2008 and would be paid $2.025 million over the next two years. 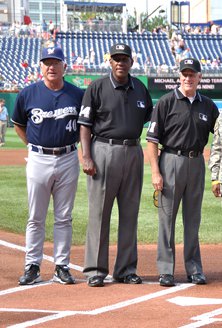 He was then offered a job as Mariners bench coach by Bill Bavasi but turned it down - it was the first time since 1972 that he was not managing, coaching or playing baseball, going back to the time when he worked for Westinghouse between his senior year and the amateur draft (Macha's degree is in civil engineering). John McLaren was hired as Seattle bench coach instead and then replaced Mike Hargrove as the team's manager when Hargrove quit in mid-season.

Macha was hired as a rotating studio analyst about the Boston Red Sox for the New England Sports Network. In 2009, he was hired to manage the Milwaukee Brewers. He kept the team in contention during the season's first half, but after the All-Star break, the St. Louis Cardinals ran away with the NL Central title. He was then fired after the Brewers had a poor season in 2010.

Macha is the cousin of Hal Newhouser