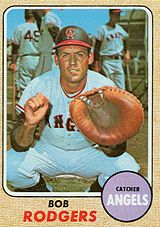 Catcher Buck Rodgers was an original member of the Los Angeles Angels, being selected in the expansion draft, and later managed the team when they were the California Angels. He also managed the Milwaukee Brewers and Montreal Expos.

Born Bob Rodgers but nicknamed after the comic book character Buck Rogers (in the 25th century), he was signed by the Detroit Tigers in 1956 after being a multi-sport star athlete in high school in Ohio. The Tigers had a number of good young catchers at the time, including Bill Freehan, who would start for the team for over a decade, and Dick Brown and Mike Roarke. The Tigers were not able to protect them all for the expansion draft in December of 1960, and the Angels picked Rodgers. He was not quite ready to play in the majors, and he spent most of 1961 in AAA with the Dallas-Ft. Worth Rangers in the American Association. Playing for former major league catcher Walker Cooper, he had an excellent season, hitting .286 in 124 games. He was called up to the Angels in September and did even better, hitting .321 in 16 games. One of his two home runs was a grand slam against Barry Latman of the Cleveland Indians.

Rodgers had an excellent rookie season in 1962, playing a rookie-record 150 games as a catcher for a team that surprised everyone by being in the pennant race until the very end of the season, and finishing 10 games above .500. Rodgers was a big contributor to the success, hitting .258 with 34 doubles, 65 runs and 61 RBI. He had a 5-RBI game against the Minnesota Twins on April 14th, then caught Bo Belinsky's no-hitter over the Baltimore Orioles on May 5th. He was named to the 1962 Topps All-Star Rookie Team and finished second to Tom Tresh in the 1962 American League Rookie of the Year vote. He was praised for his flawless handling of the pitching staff and for displaying the leadership qualities that would lead to future managerial jobs. He was the Angels' starting catcher until 1968, playing over 100 games each year until that last one when he lost the job for hitting only .190. He twice turned 14 double plays, which is an Angels' franchise record. He was behind the plate when pitcher Jack Hamilton beaned Tony Conigliaro in 1967, ruining his career and almost ending his life. The toll of catching all those games (almost 900 in his 9 seasons) affected his hitting and he played his last game at age 30 in 1969, with a career .232 batting average.

All of Rodgers' years in the majors were played under manager Bill Rigney, who was fired from the Angels early in 1969. When Rigney was named manager of the Minnesota Twins in 1970, he hired Buck to be one of his coaches. He managed a couple of seasons in the Angels minor league system in the 1970s, then was taken to the Milwaukee Brewers by Harry Dalton, after he went from being GM of the Angels to that of the Brewers. He was Milwaukee's third base coach under George Bamberger starting in 1978, then replaced Bamberger on an interim basis in 1980 when he had to undergo a coronary bypass. Rodgers took over as permanent manager later that season, then led the Brewers to their first postseason appearance when they finished first in the second half of the strike-shortened 1981 season. The Brewers lost to the New York Yankees in 5 games in the Division Series. When the team started slowly in 1982, he was fired and replaced by Harvey Kuenn, who led them to their only World Series appearance. 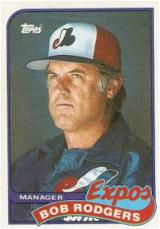 Rodgers returned to manage the Indianapolis Indians in the Montreal Expos organization in 1984, and after Bill Virdon was fired as Expos manager late that season, he was hired as his successor in 1985, getting the nod over Felipe Alou. The Expos were shedding payroll and seemed destined to sink to the bottom of the standings when he was hired, but he managed to keep the team competitive over his six first seasons at the helm, leading them to a .500 or better record during five of these. He did his best job in 1987 when the Expos started the year decimated by collusion, having lost Andre Dawson to free agency, and with Tim Raines, Bryn Smith and Dennis Martinez prevented from rejoining the team until May. He kept his makeshift squad together, and by the time the three returned, they were able to make a run at a division title, staying in the race until late September, finishing with 91 wins. He was named the National League Manager of the Year for his work that year. The Expos made another serious run at a division title in 1989, and were in first place before collapsing in early August and finishing at .500. In 1990, he started the season with three rookies in the line-up and a patched-together starting rotation, but again kept the team in contention all year, finishing with 85 wins. He finally ran out of smoke and mirrors in 1991, when he could do little with a team that had last-place talent and would in fact finish in the cellar. He did not get to see that, getting fired in early June.

The firing was actually a blessing in disguise, since it make Rodgers available for the job he had always been meant to occupy, that of manager of the Angels. He replaced Doug Rader on August 26th and got the last-place team to play above .500 the remainder of the season. Having been designated as the Angels' manager-in-waiting almost from the time of his major league debut 30 years earlier, it seemed like he was the man to lead them to the promised land of a World Championship, but it wasn't to be. On May 21, 1992, he was injured in the 1992 Angels Bus Crash. He suffered a broken rib, left knee and elbow. He ducked out of the way of a large tree limb that would likely have killed him as the bus dove into a ravine by the side of the New Jersey turnpike, but still suffered serious injuries. He took a leave of absence from the team to recover before coming back in August. However, the magic was gone after that. The Angels finished with a losing record that season and in 1993. When they started the season slowly in 1994, Rodgers was fired and replaced by Marcel Lachemann. He became a scout for former teammate Jim Fregosi, now the manager of the Philadelphia Phillies. In 1997, he was hired as manager and director of baseball operations for the Mission Viejo Vigilantes of the independent Western Baseball League. He had to take a leave of absence that year when his mother was killed and his father grievously injured in a car accident back in Ohio. He returned for the 1998 season, then decided to retire, having in the meantime received a large insurance settlement from the 1992 bus crash.

Rodgers moved from his native Ohio to Yorba Linda, CA with his wife and four daughters in the late 1960s, and then to Corona Del Mar, CA after retirement. He remains close to the Angels, participating in their golf tournament and other charity events.